Review: Winning With Him 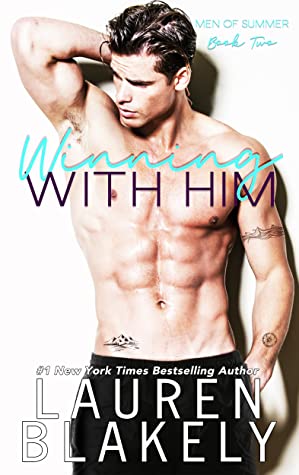 We pick up Grant and Declan’s story right as we left them at the end of Scoring With Him – Declan just arriving in New York to join his new team, and Grant back in Arizona ready to re-focus on making the starting lineup,  but happy knowing they’ll be together in November.  But Declan’s dad shows up unexpectedly,  and he comes dangerously close to spilling the secret of their relationship – even though he doesn’t even know for sure Grant and Deck are together.  Declan knows that if his father blabs about their relationship, it will be Grant’s career that suffers.  As a rookie, Grant would then be known as the player who was together with a teammate- not the reputation he wants.  Declan makes a decision that changes the course of both their lives:  he sends Grant a break-up text.  It’s the cowardly way out, but he knows he won’t be strong enough to do it if he hears Grant’s voice.

The night before opening day, Grant has made the roster.  But he is still sort of reeling from what happened with Declan.   His phone lights up with a call, and he just KNOWS who it is.  Deck tries to explain, tries to apologize, but Grant knows he has no choice but to walk away.  His game will suffer if he’s constantly wondering where he stands with Declan.  And he can’t afford that.  He can’t afford to risk NOT becoming the man he wants to be.

Over the next 5 years, with they run into each other occasionally – and they both continue to feel the crazy pull to each other, but they don’t give in – well – not completely!  But the years give them both time to grow.  Declan finally decides he needs to face the past with his father.  So he goes into therapy.  And Grant is able to get involved in working with LGBTQ kids through mentoring them at sports.  He grows into the man he always dreamed he could be.

I LOVE how self-aware both these characters are.  They are both so determined to be the best people they can possibly be, even though it means they spend years apart.  Somehow they both know that until they’re each whole on their own – they won’t be successful together.  And they are both SO motivated to be the best for each other, they deal with the uncertainty of not being together until the time is right.  And when they did finally come together for their happy ever after – it’s SO wonderful.

I LOVE Grant and Declan.  These two guys are one of my favorite couples ever, and I was SO excited to hear that Lauren decided to write a third book for them, All In With Him… So we don’t have to say goodbye to these two just yet.  I can’t wait to see what their future holds!