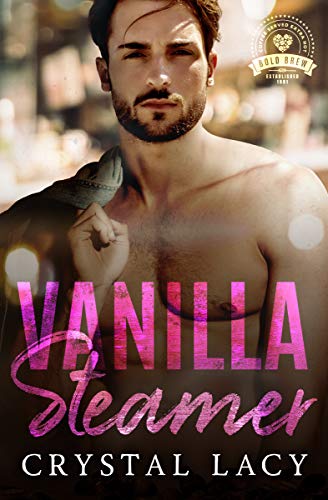 Vanilla Steamer is the story of the sweet doctor Landon and cocky barista at Bold Brew, Vann.  They’re absolutely an odd couple, but they both feel the attraction between them right away.  Vann is super into the kink scene, and before he moved home from New York City, he was known for his rope ties as part of BDSM.  Landon has never explored his kinky side before, but meeting Vann opens up all kinds of new doors for him.  He discovers almost immediately that he has a strong desire to submit – letting Vann take over in the bedroom and trusting him enough is a major turn on for Landon.

I had a little trouble with Vanilla Steamer for a couple of reasons.  Landon is a doctor in a relatively small town, and he has zero issues with not only jumping into the kink scene with both feet, but he’s okay with a LOT of exhibitionism at a party they attend.  I couldn’t quite get past the fact that he didn’t care at ALL about possibly being seen by a patient or someone else in the community.  Obviously, being into kink is nothing to be ashamed of, but I thought it would have made more sense for him to at least consider that he could be taking some risks with his career by being so open about something that the vast majority of people do NOT understand.

I also thought that Vann’s issue with not wanting to play with rope anymore was a little bit off.  Quite honestly, the trigger that put him off rope play seemed pretty minor.  No one was hurt, and while he may have made a questionable decision, he was in a safe place during the incident, and even if something HAD gone wrong, there were many other people around to help.  Honestly, for someone who is so deeply into the scene, that didn’t seem like it would be enough to traumatize him so he stopped playing with rope entirely.

Vanilla Steamer was a quick and interesting read, for sure.  I would have loved to know a bit more about Landon’s history though.  In the end, the issues around the story just meant I couldn’t quite love it.