Review: Upside Down by AM Madden 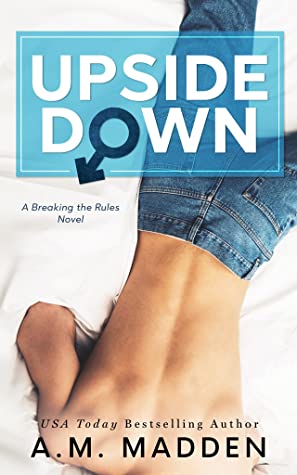 Review: Upside Down by AM Madden

Cooper Stanton is a kind, easy-going, popular professor of English Lit who is a crazy romantic, but who has never been able to find a deep connection with any of his girlfriends.  Try as he might to find that deeper level, something has always been missing, and he is beginning to believe there’s something wrong with him as he watches all of his siblings find their “person” and start living their “happily ever afters”.

Ricky Burrows on the other hand is a gorgeous, openly gay and somewhat arrogant co-owner of a luxury yachting company – Coop’s sister’s business partner.  He’s been out for years, but after being used as an experiment once upon a time, he has zero interest in anyone who hasn’t yet accepted their own sexuality.  Strangely, though, he can’t seem to  get Cooper out of his head.

The week they spend together on the yacht celebrating Coop’s brother’s wedding stirs things up. Ricky can’t seem to resist telling Coop that he sets off his “gaydar”, and naturally, Coop is utterly taken aback – and thoroughly annoyed by the idea.  Even with all of his bad luck at finding love, he’s only ever been attracted to women.  But there’s something about Ricky that he can’t get off his mind – irritating though he might be.  One night, a drunk Cooper decides to go for it with Ricky, but is turned down flatly.  Despite his desire to help Coop realize who he really is, he will not let himself be used again so that someone can try on a new sexuality to see if it fits.

A few months later and Cooper is back in South Florida to spend the summer with his sister, and he hasn’t been able to get Ricky off his mind.  He comes clean to Ricky about it, and Ricky can’t resist spending time with him.  But the tables get turned. Cooper comes to accept the fact that he’s attracted to Ricky, and is willing and ready to take a chance on a relationship with him, but Ricky, even though he cares for Cooper, can’t seem to get past his fear of being used as an experiment again.

Both Coop and Ricky grow and change so much over the course of the book.  I really loved reading about Cooper’s journey of self-discovery and then self-acceptance.  And Ricky has to learn to face his fears.  He can’t hang back and just observe life from the sidelines.  If he wants happiness he needs to get in the game and put himself at risk.  Upside down ranks as one of my favourite stories in one of my favourite tropes and is definitely worth a read.