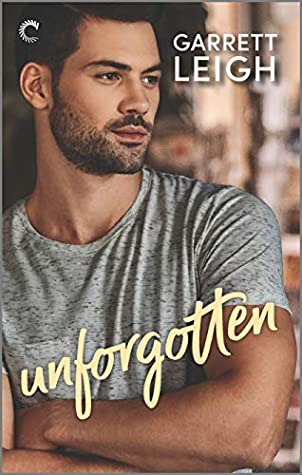 Unforgotten is book 2 in the Forgiven series, but I haven’t read the first book and I still loved it.  There is enough back story given about Luke and Mia (Billy’s brother and Gus’ sister) that I didn’t feel like I was missing any pieces.

Billy Daley and Gus Amour haven’t set eyes on each other for five years when Billy rides back into their small, English town on a broken-down, stolen bicycle with his sweet stray cat, Grey.  Because Gus will do absolutely anything for the Daley family, at Luke’s request, he lets Billy move into his house until he can get back on his feet.  They also end up working together in Luke’s roofing business.

Billy and Gus shared one kiss before Billy left town, and neither one of them has ever forgotten it.  It roused feelings in both of them that they couldn’t get past.  And both had a lot of other things on their plate to deal with.  Gus spent years dealing with the death of his mother, and the fact that his sister left town and he was alone for years.  He fully expects everyone he gets close to will leave him, so hookups – lots of them – allow him to forget his fear of abandonment for a little while without actually risking his heart.

Billy is also traumatized by the death of a parent, and he was left behind when Luke left to join the Navy.  But unlike the affable, easy to please Gus, who hides his pain in other men’s beds, Billy retreats into himself.  He battles with alcohol, and a terrible accident at work that leaves him with permanent, chronic pain that nearly drives him to madness.    Billy’s broken-ness is much more obvious than Gus’s, but it’s just as deep.  He acts as though he cares about nothing, but he loses his job and is nearly arrested, both times in defense of animals that are being abused. He’s a sweet man who’s taken some hard knocks.

Garrett writes broken men SO perfectly.  They both have such deep trauma, but even when things are at their worst, somehow you have hope that they will be okay in the end.  Unforgotten is a lovely book, and Billy and Gus are characters that will stay with me for a long while.