Review: Two Men And A Baby by Isla Olsen 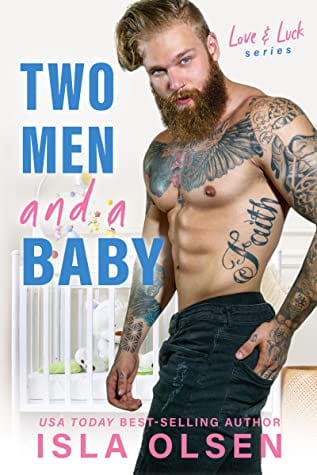 Review: Two Men And A Baby by Isla Olsen

Two Men and A Baby is so cute and so much fun.  It was exactly what I needed after reading a couple of pretty angsty books lately.  Josh and Connor knew each other as kids, but even though Josh dated Connor’s brother Declan for a couple of years, and their families are close friends, they hadn’t seen each other for nearly a decade.  That is, until they meet and NEARLY hook up at Declan’s wedding – before either of them realize the other’s identity!

Connor realizes right away that he wants more with Josh, though he’s willing to bide his time and wait until Josh is ready for more.  He’s willing to “woo” him, as he tells Josh bluntly.  But Connor is thrown for a loop when he learns that he has a 4 month old son he knew nothing about.  Baby Chase is the result of a quick hook-up he had with a girl while waiting for a delayed flight over a year earlier. Because Josh works in a daycare and has a degree in early childhood education, Connor calls on him for help, and Josh is more than happy to pitch in.  Josh still hesitates over taking a chance on their relationship, because he knows if it doesn’t work out, he will lose his relationship with the Kelly family, and that’s something he isn’t sure he can risk.  But after watching Connor sing to baby Chase one evening, Josh knows he’s all the way in with Connor.

Josh and Connor are such a sweet couple.  Even though Josh is Connor’s first serious relationship with a man, it’s not any kind of issue for him at all.  He knows his own mind and he’s confident in his feelings.  And the scenes with baby Chase are hilarious – especially the diaper blow-out all over the desk of Connor’s biggest client.

Two Men and A Baby is such a refreshing, light and breezy read I devoured it in one sitting.  I’ll be going back to read more of Isla Olsen’s Love and Luck series.