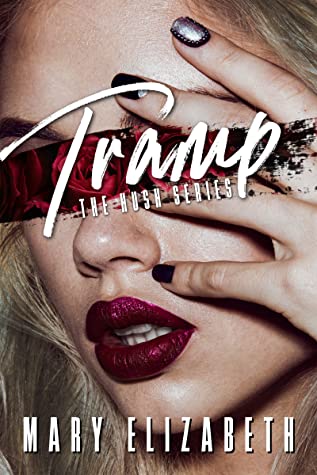 The first word that comes to my mind about Tramp is “heavy”.  Tramp is a really heavy story.  Lydia Montgomery is the highest-paid escort in her well-to-do California town. She has very strict rules for herself and as long as she follows her rules, she can get through life.  She separates her two identities – Lydia is the girl who grew up with a stripper and a drug addict for a mother, and Cara is the $2000 per hour call girl who services many of the most powerful and connected men in Grand Haven.

Lydia is able to keep her life neatly compartmentalized until she meets Talent Ridge, and the feelings she develops for him throw her completely off balance.  The walls between her two identities start to break apart, and it nearly drives her over the edge.

Lydia has told herself her she is nothing like her mother, who died a junkie, broke and alone, but she has, in fact, followed in her mother’s footsteps.   True, she has money, and the safety that comes with working with only well-vetted clients through her exclusive agency, but in the end she sells her body the very same way her mother did.  She can’t forgive herself for that.  Even though she understands that her background didn’t leave her with many choices, the level of self-loathing she experiences is heart-wrenching.  The main reason she resists any sort of relationship with Talent is because she believes down to her very bones, that she is not good enough for him.  That she’s nothing more than a prostitute and he could never love her.

I found that Tramp was less a romance story, and more a story of self-discovery, forgiveness and learning to love oneself.  Because the story is told only from Lydia’s perspective, we don’t get a great understanding of Talent’s motivations or thoughts.  The story is Lydia’s story, not so much Lydia and Talent’s story.  While the book was definitely dark and hard to read at times, it gripped my attention right through to the end.  Even though I tend to avoid a lot of dark stories it, I plan to read the second book in the series. Harlot is the story of a younger call-girl whom Lydia initiates into the lifestyle.  I think Camilla’s story will be just as dark as Lydia’s, but it should be just as satisfying to watch her get her happily ever after.