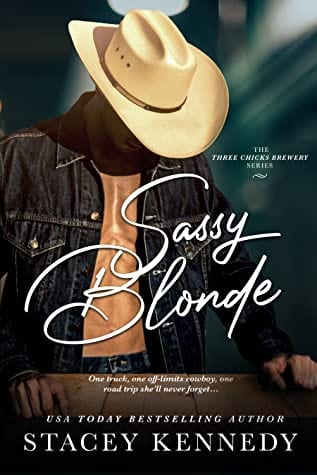 Maisie Carter has always been a free spirit. An artist by nature, she has no idea what she’s doing as co-owner of Three Chicks Brewery. But she’s determined to prove to her older sisters that she can be an asset to their grandfather’s beer legacy. The best way to do that? Make the rounds at Colorado’s craft brewery festivals and turn Foxy Diva, their top beer, into an award winner. Unfortunately, after more than one “beer mishap,” it becomes clear that she’s going to need some help.

Hayes Taylor knows he has a chip on his shoulder, but he has no interest in working through his traumatic past. He just wants to work on his horse farm, alone. The last thing he needs in his life is a woman, especially his dead wife’s best friend, the sweet-as-pie Maisie Carter. But she’s always brought out his protective instincts, and he can hardly say ‘no’ when she asks for his help…

Maisie and Hayes have been through a lot together.  After the horrible murder of Hayes’ wife and Maisie’s best friend Laurel, the two of them have become the closest of friends.  They have been able to help each other through their darkest days while grieving Laurel.  Recently both of them have started to feel like their relationship may be growing into more.

Maisie has spent the past couple of years working with her two sisters on their new business venture: Three Chicks Brewery.  But while she loves her sisters dearly, she has never felt like she really fits in.  Maisie has always been a dreamer and an artist.  Prior to Laurel’s death, they had planned to open an art studio and coffee shop together.  But that dream died with Laurel, or so Maisie had assumed.

The brewery is participating in three important beer festivals around Colorado, which will hopefully allow them enough publicity to reach out to a distributor.  The task of getting to the festivals and being the face of their brand falls to Maisie.  In some ways it’s perfect for her, as she is a natural with people, but she is also super accident prone and disorganized.  After Hayes is thrown from a horse and is forced to take a few days off from his job, he is free to come along and help Maisie.

Hayes is carrying a secret about the circumstances of Laurel’s murder, and he is terrified to tell Maisie, because he blames himself. If she blames him too, he isn’t sure he can survive the pain of losing her.  His secret is why he walked away from his career as a cop after Laurel’s death.  It also holds him back from giving himself completely to Maisie.  She can feel him holding back, but she doesn’t know why.

Both Hayes and Maisie have to learn to stop holding back.  Hayes is holding himself back from Maisie because he is afraid of telling his secret.  Maisie is holding herself back from doing what she is meant to do – create beauty in her world.

Once they both stop holding back, their relationship grows into a special and wonderful love.  I can’t wait to see what happens with Maisie’s sisters in the upcoming Three Chicks Brewery books!

“You looked at something broken, and made it beautiful. That’s your gift to the world.”

Stacey Kennedy is a USA Today bestselling author who writes contemporary romances full of heat, heart, and happily ever afters. With over 50 titles published, her books have hit Amazon, B&N, and Apple Books bestseller lists.

Stacey lives with her husband and two children in southwestern Ontario—in a city that’s just as charming as any of the small towns she creates. Most days, you’ll find her enjoying the outdoors with her family or venturing into the forest with her horse, Priya. Stacey’s just as happy curled up indoors, where she writes surrounded by her lazy dogs. She believes that sexy books about hot cowboys or alpha heroes can fix any bad day. But wine and chocolate help too.

“Sometimes when we hurt inside and can’t deal with that, we make our outsides hurt instead.”

“You take such good care of me, Maisie.” He glanced up into her eyes, finding them soft and warm. “I’ve never thanked you for that. Told you how much I appreciate everything you’ve done for me.”

Her chest rose and fell with her heavy breaths. “You don’t need to thank me.”

“No?” He stroked his thumb over the back of her hand, heat flooding him at the way her lips fell open, begging for his kiss. “You never expect anything back, do you? No matter how much of yourself you give.”

Her parted lips shut and opened again with her shudder as he kept stroking his thumb across her skin. Under her fierce stare, he allowed the desire he felt for her to flood him, to finally show her right where his head was at. “I didn’t like seeing that guy put his hands on you. I wanted to hurt him.”

Her gaze held his intimately. “I’d say you achieved that.”

He looked down at their held hands, watched his thumb slide back and forth over her creamy skin. “I don’t think I’d like to see any man put his hands on you.”

“Okay…” she said softly, obviously trying to understand where he was going with this.

He closed his fingers in hers and looked up. “We never asked for this, you and me. Never expected any of this.”

Wanting her to feel something good in a world that had made them both feel pain, he cupped her face. She leaned into his touch, her hair falling on the side of her face, her teeth nibbling on her bottom lip. “I’m tired of not acting on the way you look me.”

Her breath hitched, the only response he needed.

He wasn’t wondering if this was a mistake, he was only thinking that he couldn’t run from this anymore. Tonight, he’d seen enough. He didn’t want another man anywhere near her. That was the one truth in front of him. He couldn’t look away anymore. “I’m tired of fighting this, and I suspect you are too.”

She didn’t ask what he meant; she simply licked her lips, readying them for him.

He stroked her soft skin. “Fighting what’s been brewing here for months.” He caught the heated surprise in her eyes, but every guard was down. They weren’t just friends, but something more. Something that was hungry and urgent, that demanded to be fed. He fought back a moan, his cock hardening to steel as he slid a hand across her hip, pulling her in between his legs, needing her closer. “Only question is whether it’s time to act on it or not.”

He expected a response. But the one she gave surprised him. She cupped his face and brought her lips to his.