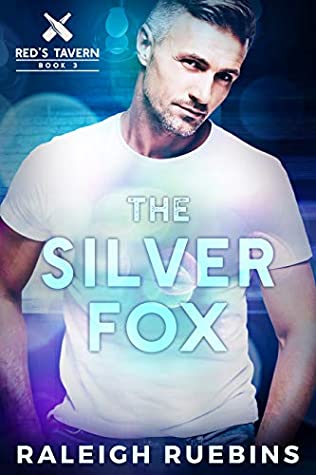 So I kinda love this book. Like a lot. I honestly had no expectations for it. I’ve not read anything by Raleigh Ruebins before, and since this is book 3 in a series, I figured I might feel a bit lost because I haven’t read the earlier books. The Silver Fox was great as a standalone though. It was clear that some of the characters were from earlier books, but it didn’t affect the story. Perry’s spent his whole life trying to take care of his family, and make sure no one gets upset. He even goes so far as to try and make his mom feel less upset about his brother getting a divorce by bringing along a hot firefighter as a fake boyfriend to a family reunion. He hopes his mom’s happiness for him will take some of the sting out of his brother’s divorce plans. But Perry spends so much time making sure everyone else is happy, he pays no attention to his own happiness. His niece and nephew even nickname him “Uncle Foreveralone”, which I thought was awful. Rock thought so too, and when he realizes that Perry won’t stand up for himself because he just wants to keep the peace, Rock takes it upon himself to stick up for Perry with some unpleasant relatives. I’m not usually a fan of the “fake relationship” trope, but it worked here. Perry and Rock are just a really sweet couple. I felt for both of them, they were both so unsure of how the other one felt. I think Perry was probably right to be afraid that he was going to be nothing more than an experiment for “straight boy” Rock, but Rock was able to prove him wrong. I also thought it was cool that Rock was freaking out – but not for the reasons you might suspect. He wasn’t freaking out AT ALL at the fact that he was attracted to a man after believing he was straight for his whole life. He was freaking out like a typical guy does – because his feelings scared him. His sexuality wasn’t an issue. It just made me wish that everyone could have that attitude. The gender of who you love really shouldn’t be the cause of all kinds of drama, but we all know that’s not reality. I really, really liked The Silver Fox, and I’ll be going back to read the earlier Red’s Tavern books, as well as looking forward to the next book in the series. I’m hoping we get the story of Perry’s newly divorced brother, Cameron.