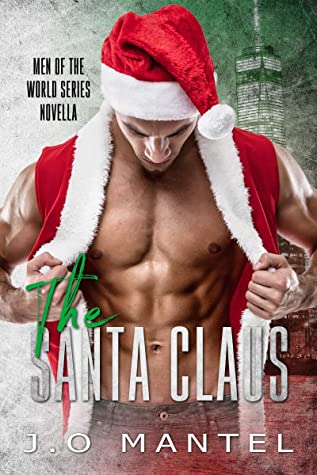 The Santa Claus is the story of Deacon and Kris.  It’s a prequel novella to the Men Of The World series, and I think it would be more enjoyable to read after you know some of those characters.  Deacon is obviously the main character who will be featured in the rest of the Men Of The World series. (In this series he’s a reality show contestant who meets 12 different bachelors in 12 different countries.)  It’s not clear whether Kris ever shows up again.

Deacon is a well-known actor but he has fallen on hard times.  His show has been cancelled and his ex-boyfriend has pretty much stolen everything from him, so he’s moved home with his family to nurse his wounds.  On a shopping trip with his sister he meets Kris (yes his name is actually Kris Kringle) who is playing Santa at the mall.    Over the course of the holiday season, they develop a friendship of sorts, and they explore the physical chemistry that simmers between them – which does wonders for Deacon’s state of mind.  But it’s not clear whether they keep up their friendship once Deacon starts filming the reality show.  We don’t get much back story on Kris, other than he seems to care a lot for Deacon.

It’s a cute, fast read, but I definitely think it will be enjoyed more if you know more about the rest of the series.