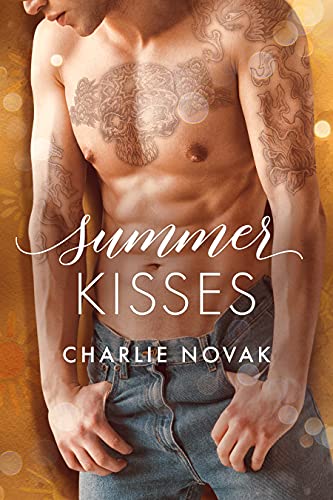 We first met Aaron and Josh in Strawberry Kisses, the first book in Charlie’s Kiss Me series, where they are at each other’s throats.  We don’t get their back stories, but it’s obvious there’s something there.

It turns out the two were involved when they lived in London, 5 or 6 years earlier.  But during that time Aaron had been sliding deeper and deeper into alcoholism and drug addiction.  He dragged Josh down with him, until Josh realized one morning that his choices were to either leave or to wind up dead.  He left, leaving Aaron angry and hurt, but shocked enough to get sober on his own.

They end up back together by chance when Josh unknowingly applies for a job at the restaurant Aaron co-owns with his best friend.  This results in them working together for the next 5 years – and mostly hating each other the entire time.

But as we all know there’s a fine line between love and hate, and these two are absolutely, madly in love.

There’s a lot to unpack in this book.  Aaron grows SO much as a person through this story.  I’m a bit of a sucker for stories about “broken” men who are able to find happiness, and Aaron fits the bill.  I LOVED watching him grow as a person.  He goes from wrestling back his addiction issues on his own, (being too stubborn to ask for help), to figuring out that his love for Josh matters more than his fear of facing his feelings about past trauma.  He knows if he can’t get his anger under control, he will likely lash out and could put his renewed relationship with Josh at risk.  He recognizes he’s been an angry, difficult person for a long time, and his desire to change and become a better human being absolutely endeared him to me.  He deserved his happy ending more than anyone, and I loved watching him find it.