Review: Starting From The Top 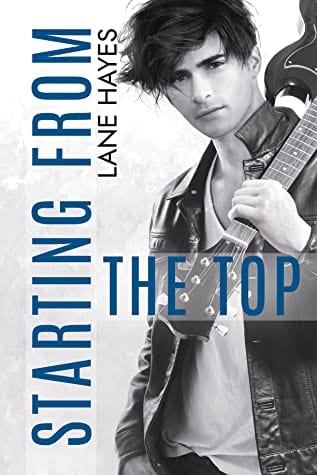 Starting From The Top is Johnny and Sean’s story.  Sean is the no-nonsense owner of several businesses, including Vibes, a popular West Hollywood club.  He’s also a divorced dad  who works REALLY hard to never mix business with pleasure.  His kids are his life, but he’s terrified that he’s not the dad they deserve, especially since his son seems to be pulling further and further away from him. From the outside Sean looks like he’s got it all under control, but on the inside, he’s a mess.  He’s afraid to be himself because he doesn’t know what the consequences will be on everyone around him.  He can’t see that trying to be all things to all people isn’t good for anyone he loves.

Johnny is the guitarist for Zero, and the band is on the brink of major stardom.  He’s starting to come to terms with the fact that once the band really makes it, his normal life will be over.  He’s already starting to be recognized when he’s out in public, more than maybe he would like.  But he had a terrible childhood; his band is the only family he has, and he loves them fiercely.  While major fame may not be his motivation, he loves his band and his music, and he has nothing holding him back.  While he relishes this freedom in some ways, in other ways he begins to realize he’s lonely.  His attraction to Sean is surprising to him, but in some ways Sean and his family fill a need in Johnny that he never knew was there.

They have nothing in common, and while they’re attracted to each other, neither one thinks they would be a good fit.  But Johnny offers to give Sean’s son some guitar lessons, and he becomes a good friend to the slightly troubled ‘tween.  He also falls in love with Penny, Sean’s 9 year old daughter, and their excitable black Lab, Lullah.  He begins to meld into their family in ways neither one of them could ever have expected.

As they both struggle to figure out what they want, the kids are the ones who bring everything to light for Sean.  Their ability to see past all the crap to the heart of what matters helps the grownups realize what’s important to them.  Starting From The Top is a really sweet story  that I’ll probably read again.  Johnny and Sean are both complex characters, and I loved them both.