Review: Scoring With Him 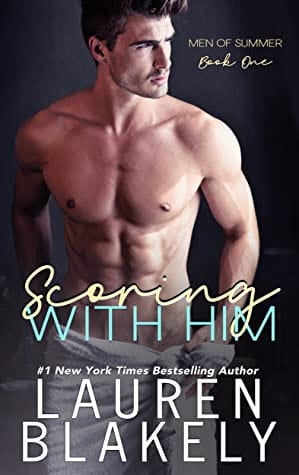 Scoring With Him is Lauren Blakely’s third mm book and it’s the first of a duet. And wow…  Grant and Declan are SO hot…  Grant is a rookie and Declan is a huge star on the MLB team from San Francisco.  They had both decided early on that any kind of sex or romance – even casual hookups, were off the table during the season. Particularly for Declan – sex and romance are saved for the off season.  And while Grant has had a major crush on Declan for ages, he is, in fact, a virgin.  But he decides he wants his longtime crush turned teammate to be his first.   They make a deal that Declan will show Grant how to be a great lover, and then their little affair will end.  No harm done to anyone and no deep emotions involved.

They both realize pretty quickly that their feelings are much more than physical.  But they know a relationship with a teammate is a horrible idea, so they are resigned to the fact that their affair will be short-lived.  Then things change and we get a glimpse of what their lives might be like if they could make things work – but, being the first book of a duet, we are left with a cliffhanger, and things are completely up in the air.

I liked Scoring With Him, but there are still SO many unanswered questions about the characters and their back-stories.  We know both had a tough childhood, and have difficult relationships with their parents, but some darker stuff is hinted at, for both of them and I’m REALLY dying to know what is happening there.  Unfortunately we’ll be waiting until the sequel, Winning With Him, comes out in early August. Once we get those answers I’ll be able to give a much better review!