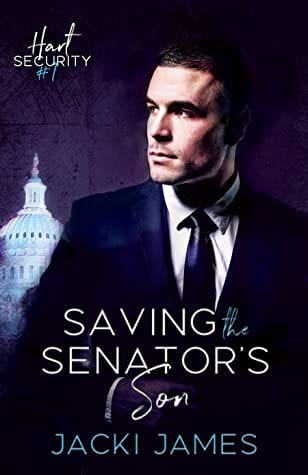 Roman Barnes is one of 3 brothers who own a security firm.  His firm is contracted to protect Trey Coben, the son of a VERY right-wing, conservative senator.   The family is ultra-religious, and ultra conservative, which makes life difficult for Trey, as he is gay.  After coming home from college, his plan is to bide his time and play the part of the perfect, all-American son for his father’s re-election campaign.  When that’s over, he will get access to a trust fund and he will be finally free of his horrible, controlling parents.  But the senator starts receiving strange and threatening letters, hinting that Trey has a “sinful” secret and he must change his ways or pay the price.  The senator, of course, has no idea that Trey is gay, so he can’t imagine what the sinful secret may be.

Because the Senator is so concerned with appearances, when Roman is assigned to protect Trey, he moves them both into the pool house, since it wouldn’t be “proper” to have a single man sleeping across the hall from Trey’s unmarried sister.  The pool house isn’t as secure as the main house, but the Senator’s number one priority is his re-election, even more important than his son’s safety.

Little does the senator know that Roman is also gay.  The chemistry between Roman and Trey becomes too much for them to resist.  At first, Roman is hesitant to get involved with the son of his client.  But he really doesn’t hesitate long.  Soon they are in a full-blown relationship, all unbeknownst to Trey’s family.  Meanwhile the letters keep coming, and they grow more threatening.

A scary and upsetting situation while heading into one of his father’s rallies leads Trey to quit attending the rallies and he refuses to be a part of getting the senator re-elected.  He and Roman move out of the pool house, and into Roman’s townhouse. Trey decides to come out to his parents, but before he can do so,  a trick by his mother ends up with Trey trapped at an isolated lake house where he is supposed to “pray and repent”, but his stalker finds him there, resulting in some scary moments.

Saving The Senator’s Son was a little bit less political than I anticipated, although it does paint the picture of how hard life must be for anyone who happens to be gay but is tied to a right-wing community.  Having to pretend to be someone he isn’t on such a public scale nearly destroys Trey, I can only imagine what’s it’s like for real people. Both Roman and Trey are great characters, and I enjoyed seeing their relationship develop.  I’ll be on board for the rest of the Hart Security series for sure.