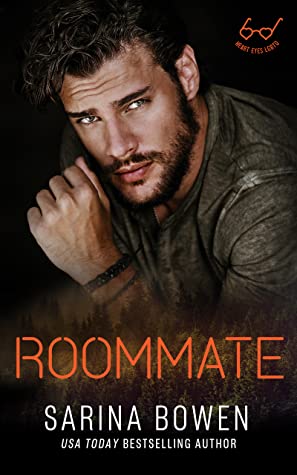 Roommate is a sort of introduction to Sarina Bowen’s True North World, set in a small Vermont town.  Roderick left Vermont after high school, but he has returned VERY down on his luck after ending a bad relationship.  He’s hoping his parents will let him stay with him – even though they don’t approve of his “gay lifestyle”. When he lands on their doorstep he sadly finds out that they want nothing to do with him unless he’s willing to deny who he is, using religious nonsense as an excuse.  But he manages to luck out and find a job at the Busy Bean, a coffee shop owned by a cousin of Kieran’s. He just has to wait for his first paycheck to clear before he can get an apartment.

Kieran and Roderick were aware of each other in high school: Kieran stumbled upon Roderick together with another guy a few times –  and he stayed in the shadows and watched the boys together.  What he didn’t know was that Roderick had seen him every time, and had enjoyed putting on a show for the younger Kieran.

Grown up Kieran isn’t exactly in the closet, he’s not sure where his sexuality lies on the spectrum.  Living with his family hasn’t made that exploration easy, and he’s ready to move out and figure some things out about himself. He rents a house from his cousin and works at her coffee shop every morning – the same coffee shop that just hired Roderick.

One cold night before Roderick’s first check has come in, Kieran discovers him attempting to sleep in his car.  Even though he’s mortified that Roderick might remember him creeping on him back in high school, he invites Roderick to sleep at his house. This, eventually turns into a more permanent roommate arrangement. Roderick struggles at first with not wanting to jeopardize his job and his living situation, but their attraction proves too strong in the end, and with a few bumps in the road, they’re able to figure it out.

Kieran and Roderick are characters that have stayed with me, and I’m hoping we will get some glimpses into their life together in the upcoming Vino & Veritas books!