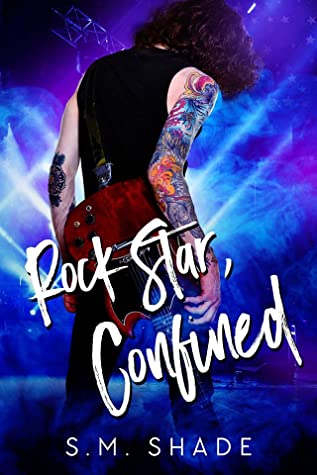 Patrick Thorn is an up and coming rock star who ends up unable to get home to Canada after the border closes during the pandemic.  He ends up quarantining in a rental home in Kentucky – but due to a mix up, Geneva has rented the same house.  She invites him to be her roommate, and surprisingly, it works out.  Geneva is working on writing a book, and while we don’t know for the longest time what it’s about, we know she has secrets.  It’s clear she has been through some kind of horrible experience, but she is hell-bent on keeping her walls up around Patrick – even though their connection is clearly more than just physical.   After Geneva receives a mysterious phone call one night, Patrick knows there’s something serious going on, and he knows he wants to help her – whatever it is.

When Patrick does finally learn what Geneva has been through, it only makes him love her more, while she had been totally convinced he would be horrified when he found out.  Learning about Geneva’s experience also prompts Patrick to share a horrible experience of his own, something he had never told another soul.

They had both experienced horrible trauma in their lives, and ultimately, it ended up leading them to each other, even though they had both believed their experiences would leave them forever alone.  “Not everyone is loved, and sex can be empty.  They aren’t things everyone gets to enjoy, but pain is universal.  Love and sex may be the joys of life, but the string knotted through us all is suffering”.  That quote makes it sound like a really dark book, but it isn’t.  It’s actually a story of overcoming.  Geneva uses the coping skills she has learned over the years to help her cope with new stresses, and it’s surprisingly uplifting.  While their commonly experienced pain did bring them together, because they had both experienced such pain, that they were able to recognize true love, and eventually learn to be strong enough to reach out and grab it.