Review: Risking It All by Isabel Lucero 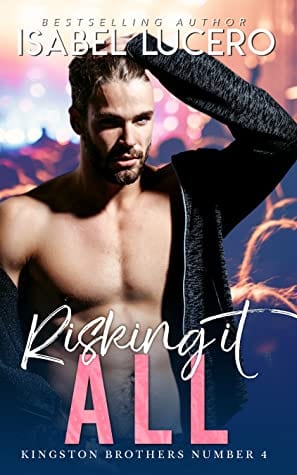 Review: Risking It All by Isabel Lucero

Looking for the Release Blitz for Risking It All? Click Here

Growing up in small-town Ohio, Merrick and Alejandro didn’t have anyone to talk to about being gay – until they found each other.  Best friends throughout high-school, they were also each other’s first love, but that was a secret.  They made plans for their future together – but real life got in the way when Merrick’s band got an offer to record an album. Without giving Ali any real warning, he left town.  In doing so, he broke Ali’s heart.  The band then took off and Merrick became a hugely famous rock star, meaning he didn’t come home for any extended period of time for a long time.

Finally, on an extended break from touring and recording, Merrick returns home to Gaspar .  He knows he’s still in love with Ali, but he also knows he may have absolutely no chance with him after the way he treated him over the years.  Merrick is exhausted form working and touring, but even more exhausted from hiding who he is – the only person in the world who knows he is gay is Ali, and they haven’t spoken for more than 5 years.  He is finally ready to share who he is with the world – starting with his brothers and then his bandmates.  He knows it’s going to take a LOT of work for Ali to trust him again.  But the one thing he knows for sure is that he has to try.

Merrick does the work to get Ali to trust him again, but as I was reading I wasn’t sure whether I would be able to forgive Merrick if I was in Ali’s shoes.  Though he always loved Ali, Merrick made REALLY big mistakes.  There was  no good reason for Ali to ever trust Merrick again, especially because Merrick had betrayed his trust more than once.  It felt like Merrick was stringing Ali along for years until he was ready to come out of the closet.  I had a bit of a hard time connecting to Merrick’s character because of that.  But in the end, Merrick does the really hard work, and he grows a LOT as a character.  Ali grows too – he learns that trust and forgiveness are powerful and can sometimes lead to real, true happiness.

I loved the epilogue where we get a glimpse into their lives several years into the future.  But I also really liked the fact that at the end of the book was Merrick’s statement to the press – the one he made when he finally came out of the closet and told the world who he is, and who he loves.  I thought that was SUCH a great thing to include at the end of the book, and it was a fantastic conclusion to the Kingston Brothers series.