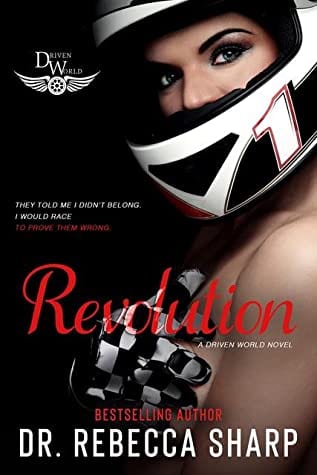 Kacey Snyder is a racer.  For most of her life her only goal has been to become a pro racecar driver.  While she’s crazy-talented, she still has to continually prove to the men in the racing world that she deserves to be there.  Unfortunately, an altercation with another driver after the Daytona 500 gets her suspended for the remainder of the season.  Even though she was assaulted by the other driver, she takes her punishment and refuses to tell anyone what he did that prompted her to punch him in the face.  A few days later, she gets a call offering her a chance to race in the Indy 500.  Something she had almost not even dared to dream about.

Upon joining her new team she is greeted by a gorgeous but surly Irishman who happens to be the team’s mechanic.  His first words to her are “you don’t belong here”, which sets the scene for their relationship. At first he won’t even tell her his name, he goes only by G, but eventually she learns he is Garret Gallagher, a top mechanic in the racing world who walked away from the sport after the tragic suicide of his brother.  When his niece requires medical treatment, the only way for Garret to afford the medical bills is for him to step back into the racing world.  He does so resentfully, telling himself the money is the only reason he is there, that he no longer belongs in the racing world.   He slowly begins to see that isn’t quite as true as he thought.

There are a lot of layers to Revolution, but at it’s heart it’s a story about belonging.  Kacey struggles to feel worthy of the successes she has worked so hard for, though she doesn’t have any kind of huge trauma in her life prompting her to feel that way. Garret also struggles with belonging.  He wrongly believes he is responsible for Danny’s suicide, and feels like he must give up his entire life and any chance at happiness as a penance.

For Kacey, an honest conversation with her friend Gwen helps her see that it doesn’t always take a big traumatic incident to cause years of self-doubt, but that she is capable of overcoming it.  For Garret, it takes some strong words from his 7 year old niece, who is battling cancer, to help him realize he is making a huge mistake by denying himself a full and happy life. After several false starts, Kacey and Garret eventually find themselves able to accept they are exactly where they should be, together.

If you’re looking for a hot read (the juicy bits are SUPER steamy) with really interesting and layered characters, try Revolution.