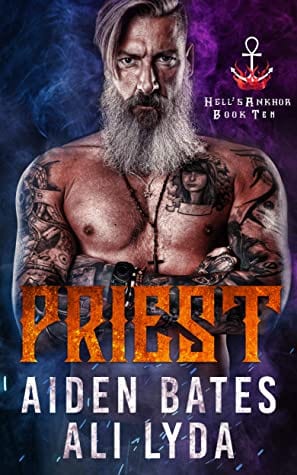 The Hell’s Ankhor series is one of my favourites. I love the chosen family this band of brothers builds together.  Priest is the widow of Ankh, who was one of the club’s main founders.  He’s been alone since Ankh’s death a couple of years earlier, but he finds his relationship to one of his closest friends changing.

Mal is the president of the brother chapter of the club, and he was close friends with Ankh as well.  Priest never used to think of him as anything more than a friend, but they both start to feel differently about each other as they grow closer.

Ankh has to struggle with his feelings of guilt – he needs to be able to understand that loving Mal doesn’t mean he loved Ankh any less.  But he is terrified of being hurt again. He’s not sure he would be able to pick himself up if he lost Mal the way he lost Ankh.  Things get even more complicated when they discover that Mal is being stalked by a past hookup.  And things get out of control pretty quickly.

I loved watching these two older guys stumble their way towards happiness.  There’s something to be said for the fact that being older means you have less tolerance for bullshit, and even though Priest is terrified of his feelings, once he figures himself out, they can quickly move past the hurt he caused Mal by running scared.

It seems like this may be the final book of the Hell’s Ankhor series, as everyone in the group seems to be paired off.  Not sure if there are any plans for a spin-off series, but I’ll be signing up to read it if there is!  If it is the final book, it’s a lovely way to close out a great MM series.