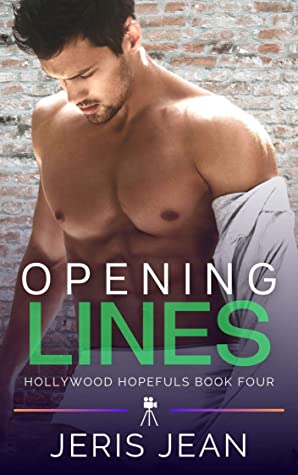 Opening Lines is the 4th book in the Hollywood Hopefuls series by Jeris Jean.  I’ve loved the three previous books, but I knew Opening Lines featured Bowen Price – a character I didn’t like at all.  We first met Bowen in Book 3, when he became an investor in Matt Deerwood’s new café.  I was not a fan when we first met Bowen, and it seems, neither was Matt’s brother, Clark.

I was curious about how Jeris was going to turn Bowen into someone I actually cared about.  He came off as a super-slimeball in Book 3 and I didn’t trust him at all.  But Jeris is great at developing her characters, and in Opening Lines, we get to know Bowen, and why he acts the way he does.  I wouldn’t say he ended up as a favorite character of mine, but I could understand why he presented himself a certain way to the world. We all have a mask to wear, after all.

The heat between Clark and Bowen is delicious – made even hotter because prior to meeting Bowen, Clark had been totally dis-interested in sex and romance.  So the intensity of his attraction to Bowen – someone he thought he couldn’t stand – is especially confusing to him.

As we got to know them both, it became more obvious that these two are very well suited to each other.  They had both been thrust into caregiving roles to younger family members when they were still young people themselves.  And they still put their families first.  They understand each other and they both get that sometimes family has to come first – but part of their journey together is them both discovering that sometimes putting yourself first is more important.

Opening Lines is a great addition to the Hollywood Hopefuls series – but hopefully it’s not the last – we need a story for Bowen’s sweet nephew, Wyatt!!