Review: Off Base by Annabeth Albert 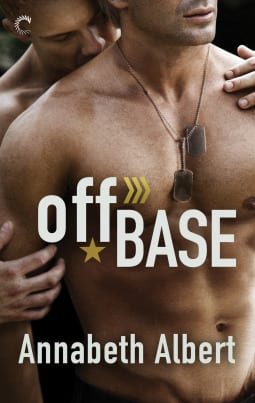 Review: Off Base by Annabeth Albert

I have found a new favourite author!  Off Base is the story of brand new Navy SEAL Zack, and math graduate Pike – Zack is so far in the closet he hasn’t even fully admitted to himself that he’s gay.  And the fact that several guys on his Navy SEAL Team are super-homophobic makes things even riskier for him. Pike is a friend of a friend, and he never fails to get under Zack’s skin… It’s like Pike can see right into Zack and understand things about him that he doesn’t even understand about himself. A drunken night together  leading up to a near-kiss just freaks Zack out even more.

In an effort to avoid the bullying from a homophobic SEAL on his team, Zack moves to off base housing.  And in a crazy coincidence Pike ends up in San Diego with  for a teaching job.  They end up as roommates and working together to renovate the small home owned by Zack’s senior officer.  Eventually they give into the chemistry between them, but Zack is still terrified to come out of the closet.  His family back in Arkansas is uber right-wing and religious, and he knows coming out will mean ending his relationship with them.  But he comes to understand that what he feels for Pike isn’t just a passing phase.  And with some support from more senior Navy SEALs, he realizes that maybe his priorities need to be adjusted.

I loved Off Base and I can’t wait to read the rest of the series.  I think my favourite part was the fact that the senior military members were so strongly in support of Zack. It gives some hope that real life can get there someday as well.