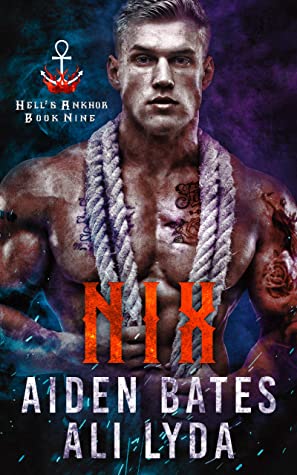 Nix is the 9th book in the Hell’s Ankhor series.  I’ve read the first 5 or 6 of the books, but somehow I’ve missed a few, and came back to the series with Nix.   I enjoyed Nix, but I will definitely be going back and reading the books I’ve missed, as there were a LOT of references to stuff I didn’t know about.  It was easy enough to follow, but would be much more enjoyable with more background.

Nix is an enforcer with the club.  He’s a recovering addict and, as far as he knew, straight.  But meeting Dawson throws his perspective all off.  His attraction to Dawson is unlike anything he has felt before.   While this is confusing  – since he had really believed himself to be straight – he doesn’t really freak out or get upset about it, which I loved.  He is such a solid, mature character.

Dawson is a few years older than Nix, but he’s way behind him in maturity and life experience.  He works construction for the club, but he has a serious drinking problem he’s not ready to face.  He ends up getting banned from Ballast, the club-owned bar.  But even that isn’t enough to shake some sense into him.  He knows he’s heading down a dark road, but even his strong feelings for Nix aren’t enough to keep him on the wagon.

Nix has to struggle with whether he can risk his own sobriety to spend time with Dawson, when he isn’t ready to deal with his own addiction.  Having been through it, Nix knows that Dawson won’t stop drinking until he’s ready.  And aside from his own issues, he has to deal with the fact that Dawson’s irresponsible behaviour while he’s drunk begins to put the rest of the club in danger.

Both men learn a lot from each other.  Dawson learns what it’s like to truly want to change, and to truly want to be a better person – so he can feel like an equal in any relationship with Nix.  Through Dawson, Nix figures out his own sexuality, realizing that he’s demisexual – that he’s attracted to a person, regardless of what gender that person is.  This was a revelation to him, since he had spent years thinking there was something wrong with him because he wasn’t interested in casual sex.  Nix is a story about growth and change, and  second chances.   I really enjoyed it, but I will enjoy it more once I fill in the gaps I missed in the other books!