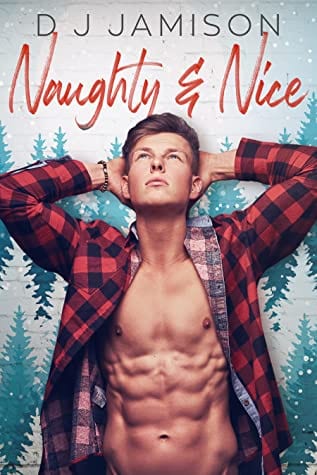 This is the first book I’ve read by DJ Jamison and I think I’ve discovered a new must-buy author!  I loved Jonas and Quinn.   At the beginning of the story, Quinn is struggling.  He has dropped out of  school and escaped an abusive relationship, but he has been lying to his mom about the whole situation, and is feeling completely lost.  He’s fortunate that his former step-dad loves him like a son and offers their family cabin in the mountains of Colorado as a place for Quinn to stay and get his life in order.

Even though they were step-brothers as teenagers, Jonas has been crazy in love with Quinn for years.  Quinn was so grief-stricken over his dad’s death when they were kids that he was nearly unreachable, and the only way Jonas could get any reaction out of him at all was to antagonize him.  What Quinn never knew was that Jonas was desperately trying to pull him out of the deep hole of grief he was drowning in.  After their parents split up, they didn’t see each other, and it had been 4 years since they had one awkward but unforgettable kiss under the Christmas tree.

When Jonas decides to head up to the family cabin for Christmas a few days early, the last thing he expects to find there is Quinn.  It doesn’t take long for the spark of attraction between the two to flare into a burning flame.

I adore stories of couples getting snowed in together, and this one was perfect.  I loved how Quinn was totally unprepared for the conditions of a snowstorm in the Rockies, but he was still determined to exert his independence.  He was going through such a tough time, but he discovered his strength and independence up in the mountains.  He learned that Jonas not only respected his wishes, but loved him because of who he was.

Jonas’ character stays pretty steady and solid throughout the book, but we get to see Quinn come out of his shell and grow into his own person.  He learns to ask for what he needs, in the bedroom with Jonas, and in all other areas of his life; learning that not every guy he meets is controlling and mean like his ex.   He goes from being a depressed, beaten down young man, to the brilliant, sassy and strong person he truly is.  And though Jonas believed he had been in love with Quinn for all these years, he realizes that true love is a give and take,  not a one-sided thing. What he comes to feel for Quinn in the present is real, true love and doesn’t hold a candle to what he felt when they were kids.