Review: My Only Regret By Leigh Lennon 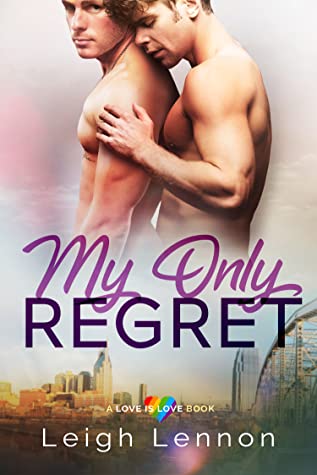 Banks Weston and Dallas Phillips discover what love truly is all about in this sweet story.

Review: My Only Regret by Leigh Lennon

Book 2 in Leigh Lennon’s Love Is Love series tells the sometimes heart-wrenching story of Dallas Phillips and Banks Weston.  The two men had been in love for years, and were married about a year before the book begins.  At the time, Banks is a mostly unknown country music singer, on the cusp of making it to the big time.  Dallas Phillips is one of the stars of the hometown pro-football team, already well known in Nashville.  They made big plans to come out of the closet together, but after Banks kept his promise and came out publicly – on stage – Dallas panicked and took the cowardly step of running away – letting Banks know he was leaving in a letter. Banks was understandably devastated, and vowed not only to never forgive Dallas, but to close himself off from love permanently.

Over the following year, Dallas realized what a terrible, devastating mistake he made, eventually coming out of the closet and hoping doing so would show Banks he was ready, and hoping he would be forgiven.  Banks was absolutely unmoved.  But fate brings them together when they are both recruited to help promote a new local charity that will help LGBTQ kids who have been kicked out by their families because of their sexuality.  Dallas is determined to win Banks back, but Banks knows he will never be able to trust him again.

After one of the first charity events, Dal and Banks stumble upon a teenager and his younger sister as he is being attacked by a group of bullies – it is undoubtedly a hate crime, and both men are moved to help the kids.  They learn that the siblings are alone and in trouble, and they start to work together to help them while ensuring that they wouldn’t be separated.

My Only Regret is sad in places – as Banks’s heartbreak is palpable.  But Dallas’ love for him is strong.  Banks believes with his entire heart that even if he tried, he could never forgive Dal, or trust him again.  But the love both of them feel for the two kids who become part of their lives is what brings them together.  And because they end up spending so much time together helping the kids, Banks starts to see the man he had loved, and begins to let the ice around his heart melt a bit. I really liked My Only Regret, and I’ll definitely be reading the third installment in the series coming in August!