Review: My Only Reason by Leigh Lennon 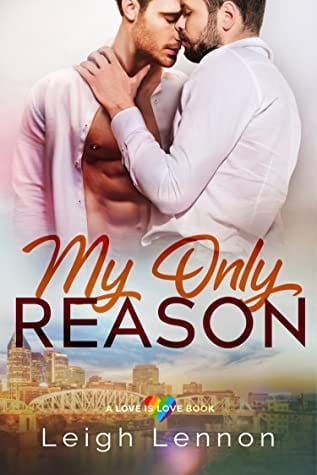 Review: My Only Reason by Leigh Lennon

Tender and sweet are the two words that come to mind when I think of Ryder and Crush’s story.  Ironic, because both Ryder and Crush are pro football players, at the top of their game in one of the most macho professions there is.

They have been best friends since college, but one unexpected kiss after a big game upends their friendship in the most painful way.  Ryder leaves Crush without a word.  He moves on, playing pro in Miami for 6 years.  Over that time he becomes the first openly gay player in pro football; a huge act of courage.

Crush tries to move forward, but for several years he is trapped in a bad marriage.  He was so confused by his kiss with Ryder, he can’t quite come to terms with it, but after years in hell with his wife, he realizes his feelings for Ryder go further than just friendship.  But he’s terribly angry at how Ryder left him without a word after their first kiss.

When Ryder is traded to the same team as Crush, the two former friends have to work through their anger toward each other.  Eventually, they are able to come together, first on the football field, and then as two souls who are truly meant to be together.

Their biggest challenges are Crush’s anxiety about coming out of the closet, and also dealing with his ex-wife, Alison, mother of his young daughter.  Alison is determined to make both Crush and Ryder’s lives as miserable as possible, and she almost succeeds in dealing them a devastating blow.  But they are able to overcome, as they are able to overcome all the other challenges that threaten to keep them from each other. After 6 years, neither one of them is willing to spend even another second apart.

My Only Reason is a wonderful, tender, low-angst story of love finding it’s was through many challenges.  Both sweet and steamy, I’m looking forward to the next book in the series, which tells the tale of Dallas, another player on Ryder and Crush’s team who has the courage to come out of the closet.