Review: Must Love Dogs and Hockey by Kelly Jamieson 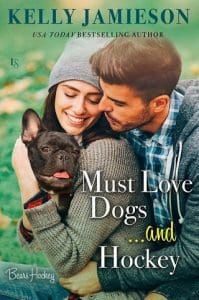 Review: Must Love Dogs… and Hockey by Kelly Jamieson

Looking for the Release Day Blitz for Must Love Dogs… and Hockey? Click Here

This book grabbed my heart and squeezed for SO many reasons. The first reason is that I had a dog named Otis,  same as the dog in the book, and that right there sucked me in!  But it was a fantastic book for all kinds of other reasons.

Easton’s back story was utterly heart-wrenching – especially given that I think Kelly took inspiration for his story from a real-life tragedy that happened in Canada’s junior hockey community a few years back.  When that part of Easton’s story came out, I bawled almost uncontrollably.  Lilly and Easton are both just amazing people.  Lilly lost her previous job because she was a whistle-blower trying to do the right thing and the company retaliated by firing her.  She’s a genuinely lovely person.  I felt really connected to her character.  Lilly recognizes that for most of her life she really did have things relatively easy.    It made it hard for her to keep going when things STOPPED being easy, and she fell into a depression.  I can absolutely relate to that.

The way the characters bond over Otis is so sweet.  I’m a big believer that people can learn to love by spending time with animals.  Easton had to learn how important Otis was to him, but in the end he did. Both characters are such strong, admirable people.  They both commit to doing the right thing, even if it means risking a LOT.   My ONE tiny complaint about this book is that I felt like the ending left us hanging – Lilly and Easton’s story gets resolved, but a new character is introduced and then it’s over!!  So of course I had to go sniffing around online, and saw that Kelly has another book coming out in December – so I guess this is book 1 of a new series?  Anyway, all in all I LOVED this book.  A sweet, engaging story with impossible NOT to love characters.  It was such a pleasure to read.