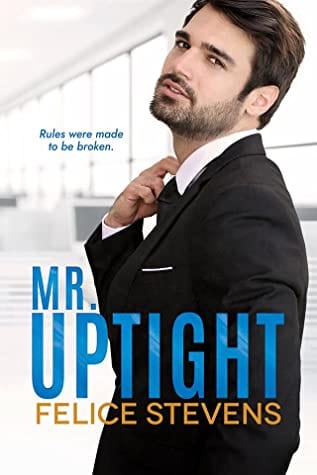 This book is so good.  Mr. Uptight is the Jude and Mason’s story.  Jude Staubman is the co-owner of a successful NYC advertising company.  He raised his younger sister, Ilana, for years after their mom passed away.  But Ilana just married Jude’s best friend, and co-owner of The Company, Doug.  While Jude is happy that his sister has found love, he is feeling pretty lost and more than a little sad at the thought that Ilana doesn’t need him anymore.  He knows it’s time to let her go, but he isn’t sure who he even is anymore if he’s not taking care of Ilana.

Mason Reiner is Doug’s younger brother.  Jude has known him for years as an irresponsible playboy, who skates by in the world using his good looks and charm, but when things go off the rails, he comes to his brother to clean up the mess – and Jude has always been right there.  Mason has been abroad for several years, working and “finding himself” overseas.  He comes home for Doug and Ilana’s wedding, and decides it’s time to stay.  He wants to put his business degree to work at Doug and Jude’s company.  Jude simply assumes he’s still the same immature kid, but because Doug will be away on his honeymoon, and Jude’s assistant moves away, he’s talked into giving Mason a chance to prove himself.

It’s a complicated situation – especially since Jude got completely wasted at the wedding and ended up with Mason in his bed, enjoying a night of amazing sex.  And now he simply can’t get the irritating Mason out of his head… What he doesn’t realize is that Mason is feeling the same way.

These two are a cut and dried case of opposites attract.  But they are so good together.  They are both adults, and while they both struggle with their own issues, I loved how they are able to (eventually) talk them out with each other. It takes them some time, but they both learn to be vulnerable in front of each other – something that is especially hard for Jude.

The story feels real, and Mason and Jude and their family are a lovely group to spend time with.  I’m not sure whether Mr. Uptight will become part of a series, but there are several supporting characters that I’d be interested in reading more about!  All in all Mr. Uptight is a fantastic read, and it’s heading right for my favourites list!