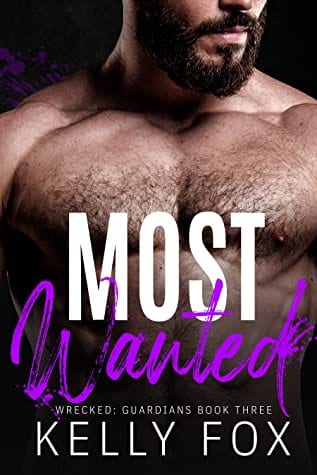 Kelly Fox has become one of my favourite authors.  The first book I read of hers was Full Contact – Wrecked: Guardians #2.  I loved Anders and Omar’s story so much that I went back and binge-read not only the first book in the Guardians series, but all 3 of the books in her Wrecked series – Guardians is a spin-off of Wrecked.  Oh My God.  This world is so much fun I kinda want to live there.  Most Wanted is a great book all on its own, but if you really want the full experience, go back and read both series – you’ll get so much more out of it!

Most Wanted is Ronan and Thane’s story. Both characters have been previously introduced and both are related to the guys at the Wrecked gym.  Ronan is a US Marshall, and Thane is a member of the Guardians.  The Guardians is a mercenary, black-ops sort of group that operates well outside the law, taking down REALLY bad people.  They ensure without a doubt that the people they go after will never be able to hurt others again.  Ronan gets called in to help the group track down a bad guy he had previously worked with in the Witness Protection Program, and there he is confronted with Thane.  Ronan and Thane’s history goes back about 5 years, when they were simply friends with benefits, but when Ronan caught feelings, and confessed them in the heat of passion, Thane literally ran away – breaking Ronan’s heart in the process. But that’s all in the past, and Ronan is determined to resist Thane and have a professional relationship only.

Thane has spent the past 5 years growing up and getting a lot of therapy to deal with childhood issues, as well as issues from his military days.  He realizes that the reason he ran away so far and fast when Ronan fell for him, was because he was in love as well.  But he was too afraid to face it.  A lifetime of being degraded and attacked by his father left him feeling like there was no way Ronan could ever love him. But spending time around him again lights a fire under him to make Ronan his – forever.

Most Wanted is a great addition to the series, and I can’t wait for the next book. I also HIGHLY recommend Kelly’s Wimberley Chronicles series, which is being released in parts through her newsletter and on her website.  It sheds light on the mysterious “Wimberley Group” that is mentioned off-handedly in the Guardians books.  It will BLOW your mind!