Review: Man Down by Kate Meader 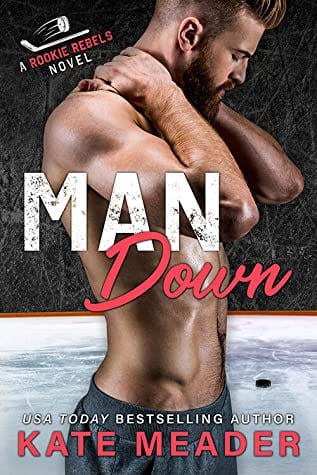 Review: Man Down by Kate Meader

Looking for purchase links and more on Man Down? Check Out the Blog Tour post HERE.

Gunnar Bond is so very broken.  After losing his wife and twins in a terrible car accident 3 years ago, Gunnar has been living the life of a hermit, avoiding contact with everyone. He spills his most intimate secrets, and exposes his pain to his dead wife by texting her phone number.  But Sadie Yates ends up with Gunnar’s wife’s old phone number.  She starts receiving the texts and eventually she replies. They develop a weirdly intimate relationship over text, lasting many months.

Sadie is dealing with her own heartbreak: a father who ignored her in favour of his second family. -The same father who ended up jailed for running a ponzi scheme.  But the daughter he chose to focus on while he ignored Sadie is now all alone.  With a father in jail, the only family she has is Sadie, her estranged sister.

I loved watching both of these characters grow.  Gunnar grows from an angry, bitter widower into someone who understands that his grief is normal, but that moving forward with life is also okay.  Incorporating the family he lost into the fabric of his life, while beginning a new chapter doesn’t mean he loved them any less.   He realizes that if he loves Sadie enough, he will learn to love himself again, so he can be the man she deserves.

Because Sadie lost her mom at a young age, and her father ignored her for most of her life, she short-changes herself.  She doesn’t demand what she needs from the people she cares about, and lets people walk all over her.    As her relationship with Gunnar grows, she learns it’s better for her to stand up for herself and hold those she loves to a higher standard: they need to treat her with respect if they want to be in her life.

The epilogue in this book almost brought me to my knees.  Make sure you have a box of kleenex nearby.   Gunnar realizes that even though his family died, he is still alive, and it’s okay to move on.  Letting go doesn’t mean he loved them any less.  And that epilogue… oh my heart…