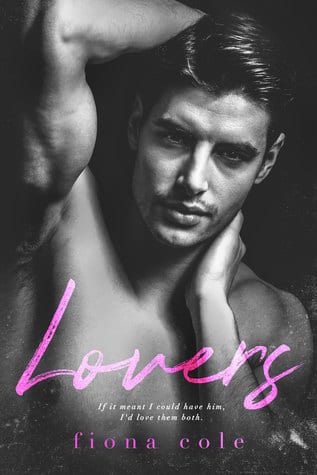 Lovers is the second book in Fiona’s AMAZING Voyeur series.  It’s my favourite of the bunch, which is saying a LOT because the entire series is SO GOOD!!

Jake Wellington and Carina Russo have been fated to be together since they were kids.  Their fathers built a business together and the family joke for years had been that Jake and Carina would get married and take over the business in time.  After college, their families got their wish when their friendship became more.

An interesting opportunity presents itself when an old college friend of Jake’s, Jackson Fields, explodes into their lives.  Jake and Jackson’s close friendship had come to an abrupt end several years earlier after a very sexy game of Truth or Dare with their friends got out of hand.  Jackson had always been openly bisexual, but Jake was 100% straight – or so he believed.  The encounter with Jackson freaked him out so badly he cut Jackson out of his life.  What Jake didn’t know was that Jackson has been in love with Jake forever.  Although, knowing Jake was straight, he never thought he would have a chance.

As the three of them start working together and hanging out, Carina starts to think maybe Jackson is the key to spicing up their sex life.  She invites Jackson into their bedroom, and things start to get REALLY interesting.

Fiona does such an amazing job of getting into the heads of all three characters.  I cried when Jake was so distraught about hurting Carina, and I cried when Carina  realized what was going on between the two men.  And I cried again when Jackson believed he was never going to be able to love Jake the way he wanted to.

Lovers shows us how complicated love can be.  And how hard it is to face the fact that being true to yourself may end up hurting people you love.  And all three of the characters have such incredible strength, that shows up in very different ways.

Lovers is absolutely one of my favourite books ever.  I’ve read it more than once, and listened to the audiobook, and every time is just as steamy and emotional.  I never get tired of these characters, and I always want more from all of them.  The next book in the series follows Carina, and her journey to her own happily ever after.