Review: Love Under Quarantine by Kylie Scott and Audrey Carlan 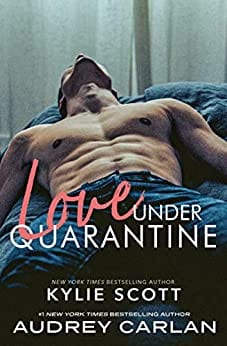 Love Under Quarantine by Kylie Scott and Audrey Carlan

“Not even in my wildest nightmares did I ever imagine we’d be living through something like this.  A pandemic.  The knowledge of how messed up everything is right now does my head and my heart in.”

OMG!  This book was exactly what I need to be reading right now! It’s so sweet and funny, with lots of juicy stuff thrown in – I had so much fun with it!

Love Under Quarantine is the first book I’ve read that is set in our current reality: the world is under quarantine because of the pandemic. I really liked reading about stuff that has happened so recently.  Just an aside –  I marvel at this world of technology we live in – a book can go from an idea in the author’s head to my kindle and I can devour it within a matter of a couple of months!!  Technology really is so cool.

It’s the story of Evan and Sadie, a pro football player and a romance writer who end up quarantined during the Covid-19 pandemic as neighbors in a San Francisco highrise where they have adjoining balconies.

Sadie is a hilarious, incredibly likeable character.  She’s funny and down to earth, but not overly insecure.  While she’s a bit surprised that Evan, this gorgeous, rich, pro football player is interested in her, and she wrestles a bit with jealousy when hearing about his past exploits, she’s also a grown-up and she is able to work past it.  Sadie is  a character I’d LOVE to be friends with.  I could totally see myself chilling with her over a couple of bottles of wine!

Love and life will persevere.  It has to.  In the meantime, I have wine.

Evan is a sweetheart.  He’s going through a scandal that’s threatening his career, so he’s incredibly stressed out, but he’s also grown-up enough to understand that even though he has problems – they pale in comparison to what’s going on with the world.  His best friend is a doctor, heading to Europe to treat Coronavirus victims, his dad is older and not in great health, and he is constantly worried about them.  His head seems to be screwed on straight.  As his relationship with Sadie grows, he also realizes that she is more important to him than just about anything else – including his football career.  As long as he has her by his side, that’s really all that matters in the end.

Both characters are surprised and delighted that their relationship blossoms and grows even though they have never been able to even touch each other. It makes for a great slow-burn romance. Because they have laid such a strong foundation, when they each make mistakes – they are able to talk about things and get over it. The weird circumstances show them what is really, truly important in life.

It’s a lovely, light story in a very dark time.  I loved it so much I’ll probably read it again!!

Humanity seems both stronger and more fragile than I ever imagined.

Available on Kindle Unlimited and: