Review: Lots of Naughty and a Little Nice by Leigh Lennon 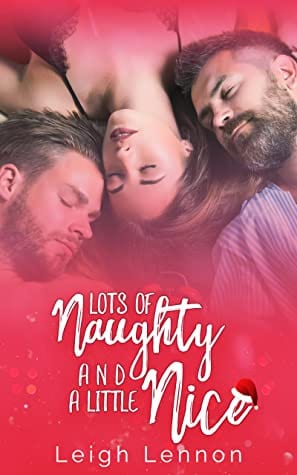 Review: Lots of Naughty and a Little Nice by Leigh Lennon

Avery is a slightly uptight, single young woman who has just received temporary custody of her teenaged sister after their mother passed away and living with her father didn’t work out. She’s working to receive full custody from the courts, which is partly who she moves into a new home.  She meets Rowan and Knox at an art gallery where she had been hoping to buy something to decorate the new house she will share with her sister.  But Rowan, who has a bit of a difficult time reading social cues, more or less runs her off when she parks illegally and he can’t let it go.  Serendipity brings them all back together though, when it turns out that Avery’s new house is right next door to Rowan and Knox’s house.  The three of them develop a tight friendship that turns into more, and their happily ever after includes living as a triad.

This book was a fun little escape.  But I was a bit disappointed that the characters didn’t seem to be as developed as they are in some of Leigh’s other books.  I liked Avery, but I found it hard to believe that someone who had been so straight-laced her whole life could be SO easily convinced to be a part of a highly unconventional relationship.  It took her no time at all to realize that she wanted to have a relationship with both Rowan and Knox.  For me, it was just a bit hard to believe that she wouldn’t have at least some conflicting thoughts about it.

There were some other parts of the story that seemed to be a bit too “easy” as well, but it wasn’t enough to put me off, and I happily finished the book and loved the happily ever after, especially the peek at 5 years into the future with the whole family.