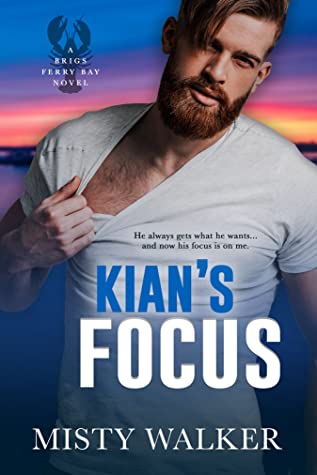 Kian is the successful owner of two businesses in the little Maine lobster-fishing town of Brigs Ferry Bay: Blur, a gay-friendly nightclub, and Focus, a sophisticated wine bar.

Archer is new in Brigs Ferry Bay, having just moved to town from Alaska to help his sister after her husband left her and their two kids.  But Archer is still grieving his partner Mason’s death from a year earlier, and he has no intention of giving in to his attraction to sweet and friendly Kian.

Archer is carrying so much pain both from the loss of Mason and from a childhood where he and his sister, Sara, were badly neglected.  As a result he simply assumes that Kian will leave him eventually, one way or another,  like everyone else in his life has.  So he fights the instinct to get attached.  When Kian has to make a hard decision about letting Sara keep her job at Focus when she clearly can’t handle it, Archer figure he was right – Kian will disappoint him like everyone else.

Sara’s depression eventually comes to a head, and Archer realizes trying to take care of everything in life all alone won’t work anymore. He needs support to help Sara get through her pain, and help to care for her kids.  Kian is there for him 100%, proving all his assumptions about being left to fend for himself wrong.

I loved watching both Archer and Kian grow.  Archer’s issues were pretty obvious, but Kian had been struggling as well.   When he watched his old high-school boyfriend come out of the closet to be with someone else it brought up a lot of insecurity.  He struggled with wondering why he hadn’t been enough for Jax.  But he needed to learn that it really wasn’t about him, Jax had his own reasons for being closeted and he hadn’t been ready 10 years earlier.

Kian’s Focus is a lovely story about letting go and moving forward.  Archer needed to let go of Mason, Sara needed to let go of her abusive ex-husband, and Kian had to let go of the insecurity that followed him around for the years. This series is off to such a great start and I can’t wait for the next installment!