Review: It’s Not You by Becca Seymour 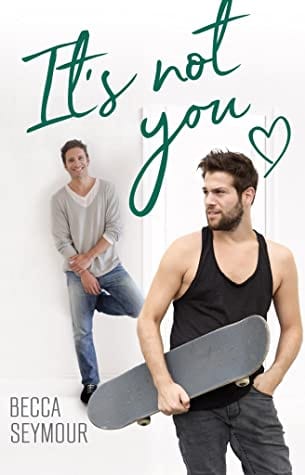 Review: It’s Not You by Becca Seymour

Billy is a retired cop who left the force after a devastating accident that killed his partner and left him with lifelong injuries.  Lawrence is a mystery.  He rents the apartment above Billy’s garage, and after he first moves in, the two of them start to develop a friendship.  But after one night together, their friendship comes to a screeching halt after Billy freaks out, declares it a mistake, and then ignores Lawrence for the next few months.

Lawrence is a gentle soul who hasn’t lived in town very long, but is hoping to be able to settle down.  However, after he suffers an accident that leaves him needing help for a while, it becomes clear to Billy that Lawrence may be hiding something from his past.  But Billy can’t figure out whether he’s hiding from something he’s done, or whether he’s running away from something or someone. Billy is certain, however, that he needs to own up to the terrible way he treated Lawrence after their night together, and then hopefully they can start their friendship over.

It’s Not You is about moving forward in life.  Both men are trying to leave their messy pasts behind, but they both realize that in order to move forward they have to face their pasts – not run from them.     For Billy, that means understanding that moving on doesn’t mean he cared for his friend and partner any less.  His partner would have never wanted him to avoid living because of grief.

Lawrence’s journey is a bit different.  Leaving a messy family life and a powerful mother behind him and working hard to live his own life was difficult, and his instinct was to keep running, but he realizes that unless he faces up to his past, he’ll never be able to stop running.

After their ill-timed  false start, Billy and Lawrence come to realize how good they are for each other.  Their happy ending is sweet and well-earned and I loved it.