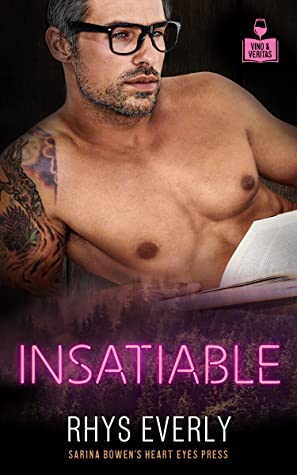 Logan and Brody are a fantastic but unlikely couple.  When we first meet Logan, insatiable is exactly what he is – his entire life is consumed with chasing after his next sexual conquest.  And once he has carved that notch on his bedpost, he uses the experience for writing his super sexy novels.  This has worked well for him for ages – really well.  But his muses have stopped talking to him and, behind on the deadline for his next novel, he heads from London to Burlington, hoping the change in scenery and the new crop of lumbersexual men will clear his foggy brain.    As soon as Logan sets eyes on Brody, the super grumpy maple wine maker, he knows who his next book will be about.  But he doesn’t bargain for the fact that Brody has been really badly hurt, and will not be making it easy for him.  Of course Logan also doesn’t realize that a very silly bet he makes at the beginning of his trip will be something that haunts him and his relationship with Brody – and once he realizes his feelings – his overwhelming fear of losing Brody has some sad consequences.

I liked both grumpy Brody and sunshiny Logan.  It was sometimes hard to watch Logan struggle with his self-confidence so much.  His ex had hurt him so badly that he just couldn’t believe Logan could see anything of value in him at all – until it was almost too late.  But I also seriously wanted to throttle Logan a lot of the time – JUST COME CLEAN for god’s sake, I kept thinking!!  The happy ending in this one is worth waiting for though.  Insatiable is yet another awesome addition to the Vino & Veritas series.