Review: Home For A Cowboy by Amy Aislin 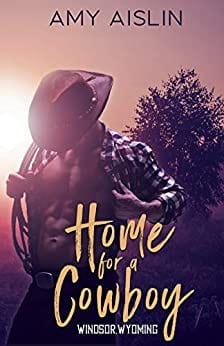 Review: Home For A Cowboy by Amy Aislin

This was my first book by Amy Aislin.  It won’t be my last!

Home For A Cowboy is the story of Lassiter and Marco.  Lassiter is the son of a prominent and wealthy ranching family in Wyoming.  He grew up on the ranch, knowing that one day he would take it over.  He’s a born and bred son of Wyoming and his love of the land runs deep.  Lassiter is also a planner.  He is most comfortable when he has a concrete plan for his future mapped out in detail.  His previous boyfriend, Ben, who was also his childhood best friend, broke his heart after he decided to move to England for a semester abroad – and then decided to stay.  After losing his best friend and his partner, Las is seriously gun-shy about relationships.

Marco is a sweet guy who plays hockey well enough to earn an invite to an NHL development camp right after college.  But, contrary to Las, Marco is kind of at loose ends.  He has earned a communications degree, but he has no desire to work in PR or in any other communications job.  His close-knit family, especially his parents, are counting on him getting signed by an NHL team. But Marco isn’t sure he wants to pursue playing in the NHL. Because he is so uncertain about his future, he happily accepts when Las invites him to come to Wyoming for the summer to work on the hospitality side of the ranch. It doesn’t hurt, of course, that he has a huge crush on Las.

Las wanted no part of a relationship with someone who was only going to be in Wyoming for 3 months. But their friendship grows and eventually Las realizes that even though Marco plans to leave at the end of the summer, he wants to have as much time with him as he can.

Both Las and Marco are super likeable characters, and I’m a sucker for cowboys – gay or straight.  There are quite a few gay or bi characters in the book. I thought was interesting that they don’t seem to face ANY kind of prejudice or bigotry.   I took it to mean Amy is writing as if society is a little more advanced than we are today.  I loved it, but it did require some suspension of disbelief!! Goals… right?  We can hope that’s where society is heading!

I really enjoyed Home For A Cowboy and I’m looking forward to the upcoming books in the series!

Add it to your Goodreads shelf: https://www.goodreads.com/book/show/52917510-home-for-a-cowboy