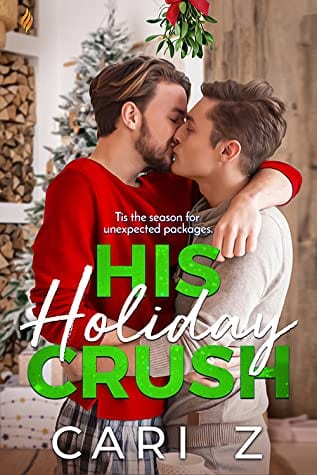 Max Robertson is a high-powered attorney in NYC and he’s on the verge of making partner.  He hasn’t returned to the small town of Edgewood for more than 10 years.  He and his mother had moved away after a scandal involving his father, and Max wanted nothing to do with the town ever again.  But Hal, his best friend, is still there.  Hal and his two adorable little girls have had a terrible year after their mom unexpectedly left home and didn’t return.   Max decides to take a very quick trip home to Edgewood to spend one night with Hal and the girls, and then hurry back to the city to prep for an important meeting.

Dominic “Nicky” Bell is Hal’s younger brother.  He’s a veteran who hasn’t been back in Edgewood long, and he’s a new member of the local police force.  He’s also had a crush on Max since he was a kid. When he gets called out to rescue a stranded BMW driver in the middle of a snowstorm, he recognizes that driver is Max right away. Max has no idea who Dominic is, but he can definitely appreciate the gorgeous cop who helps him out when his car skids off the road.  He is shocked a bit later to learn that this gorgeous man is Hal’s kid brother who he hadn’t paid a whole lot of attention to as a kid.

Max has NO interest in returning to Edgewood to live, in fact he doesn’t even want to spend more than one night there.  But his car can’t be fixed for days, so he ends up staying longer than planned.  He had always believed that making partner at his law firm was the most important thing in his life at this point, but meeting Dominic makes him question  single-minded desire to climb the corporate ladder.  He hadn’t expected to find anything but bad memories in Edgewood, but his connection with Dominic helps him see the little town through different eyes.  He realizes that

most of the people there remember him fondly, and don’t blame him for his father’s mistakes.  And that maybe what he really wants isn’t a corner office after all.

His Holiday Crush is about finding love in an unexpected place, and also being able to adjust your perspective to see that something you believe is true for a long time, may not be correct after all.