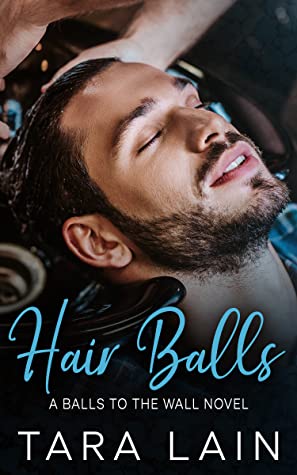 This is the first book by Tara Lain that I’ve read, even though it’s the 8th book in the Balls To The Wall series.  I have to admit the reason I signed up to review is because the title made me laugh out loud!  It totally exceeded my expectations!

Jimothy is a sweet, twinky stylist whose talent is highly regarded in the wealthy, SoCal enclave where he has his salon.  Rick, on the other hand, is a deeply closeted blue-collar construction worker who has been trying to tell himself he’s not gay, but bisexual, for years.  He hides both emotionally and physically behind his huge, bushy beard and crazy long hair that he hasn’t had cut in years.  But the younger sister he adores is getting married, and she begs him to clean up his look for her big society wedding.  So he braves his fears and goes to Jimothy’s salon after one of his gay clients refers him.  The first meeting results in him literally running from the salon in the throes of a panic attack.

He faces his fear and comes back to apologize.  Jimothy not only agrees to cut his hair, but he also agrees to renovate Rick’s wardrobe for the wedding, and even re-decorate the crappy little apartment Rick lives in.  And it turns out Jimothy is so irresistable that Rick realizes he has no choice but to face up to his reality, knowing that losing Jimothy from his life would be FAR worse than facing his fear of coming out of the closet to his blue-collar friends and father.

I loved Hair Balls.  Jimothy is the sweetest character, and he seems like he would be SO much fun to hang out with.  He’s also got the biggest heart, and I fell in love with him right along with Rick.  Hair Balls is sweet and funny and poignant. It’s one of those books I didn’t want to end because I loved hanging out with the characters so much!