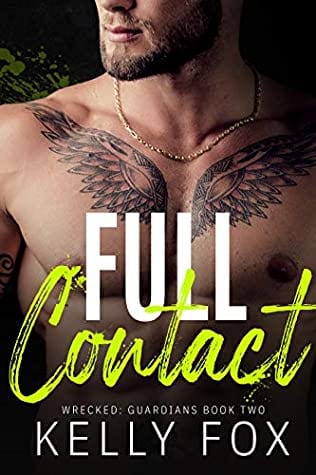 I gobbled this book up in one sitting.  Full Contact is super hot, but it hit me right in the feels as well!

While Full Contact was absolutely enjoyable as a standalone, there were definitely some references to other characters and events that I didn’t quite get, so I’ll be reading the earlier books.

Anders is a goofy, silly character.  He’s loveable enough, but you also know that he has a serious side, since he’s the Guardians team doctor.  He’s fascinated with Omar, who is very closed off and reluctant to share much about himself.   He’s constantly pulling pranks on Omar, who is NOT happy about it.

Omar is a gorgeous Iraqi immigrant who grew up knowing that if anyone discovered his sexuality – or even suspected it, he would certainly lose his life in a very gruesome manner. This has led him to keep all of his cards close to his chest.

After Anders pulls a potentially dangerous prank in an effort to get a rise out of Omar, their boss sends them on a mission together that involves a long drive together.  Just as they are starting to work through some of their tension – and maybe get to a place where they can co-exist peacefully, Anders takes things too far by trying to get Omar to admit that he’s gay.  Omar snaps. He lets Anders know in no uncertain terms that where he comes from, sexuality is no joke and it’s NOT funny to tease someone about being gay. “When someone is beheaded for their sexuality, it’s not really much of a joke… So unless I’m fucking you, my sexuality shouldn’t be that important.”  Anders is horrified at his own thoughtlessness and terrible behaviour.  He resolves to treat Omar with more respect

“When someone is beheaded for their sexuality, it’s not really much of a joke…. so unless I’m fucking you, my sexuality shouldn’t be that important.”

Their fight puts a little crack in the walls Omar is holding around himself, and later that evening the dam breaks completely, and he gives Anders his full, horrifying story. A story he has never been able to tell another person – not even his therapist.  But Anders only listens and accepts him, not judging him for the things he was forced to do as a child of war. Anders helps him to feel safe and normal. Omar begins to realize there’s much more to the big Viking than he had thought, and their mutual attraction comes through.

The rest of the story is suspenseful and exciting, with some hilarious bits thrown in.  We get to meet Anders’ parents and their …pets… and it’s a nice balance to the heaviness that is Omar’s story.

Full Contact is exciting, heartbreaking, and scorching hot, making for a super enjoyable read.  I’m looking forward to the next book in the series!