Review: Forking Around by Erin Nicholas 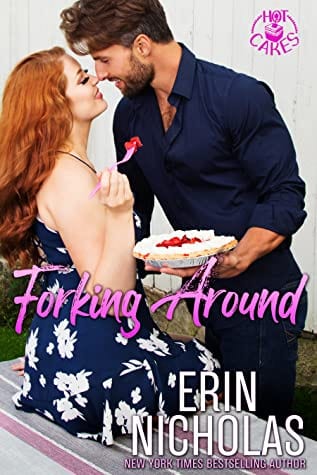 Forking Around by Erin Nicholas

“And all it took was coconut oil and a toilet brush.”

This was my first book by Erin Nicholas, and, full disclosure, this is the very first ARC I’ve received as a newly minted blogger, so I was super excited to sink my teeth into this one!

It didn’t disappoint.  Dax and Jane are both such sweet, kind people it was impossible not to fall in love with them.

Dax spends most of his life playing and making sure the people around him are having fun and not taking life too seriously.  It’s been a mission of his to prove to his father that it’s possible to be hugely successful while still having fun.   Now the video game company he owns together with 4 of his best friends has branched out and bought a cake factory in the tiny town of Appleby, Iowa.

Jane is a small-town girl through and through.  She has worked at the Hot Cakes factory since she was a teenager and knows the place inside and out.  Her life, however, has not been as playful and easy as Dax’s.  Her dad is in a nursing home at a very young age. Her younger sister lives at home with her dad’s current wife and daughter, and their lives are NOT a fairy tale.  Jane is often called in to referee fights between the two teenaged girls, as well as keep the house clean and tidy since Cassie can’t be bothered.  Jane’s life is messy and there is NOT much time for play.

“Nothing is quite as good for the soul as coloring a page that says “This Is Horseshit” surrounded by beautiful flowers.”

In spite of their differences, Dax and Jane have a striking similarity – they both live their lives dedicated to making things easier and better for the people around them. Dax by bringing the fun, and Jane lightens the load on others by helping whenever she can, babysitting, dog-sitting, giving co-workers rides when their cars break down.

Dax falls for Jane almost immediately upon meeting her, and while it takes her a little longer to recognize that they are kindred spirits, Jane eventually realizes that she needs a little fun in her life, while Dax realizes he is more than capable of helping people in real, concrete ways in addition to making them smile.

Forking Around is an adorably sweet book.  I’ll be going back to read the first book in the series, and eagerly waiting for the next one to come out!

Add FORKING AROUND to Goodreads: https://bit.ly/2Up4G6c

New York Times and USA Today bestselling author Erin Nicholas has been writing romances almost as long as she’s been reading them. To date, she’s written over thirty sexy, contemporary novels that have been described as “toe-curling,” “enchanting,” “steamy,” and “fun.” She adores reluctant heroes, imperfect heroines, and happily ever afters.