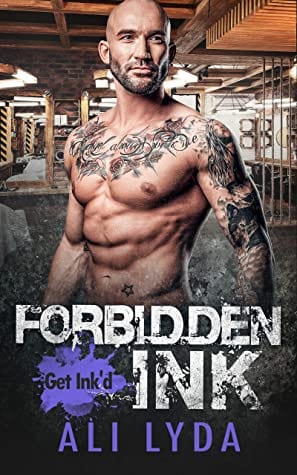 The Get Ink’d series by Ali Lyda is one of my favourites.  The characters in the tattoo shop-turned-reality show set are easy to like.  I particularly like the owner of the shop, Reagan, who appears in almost every book, almost like a dad-figure to the other guys.  It makes the shop feel comfortable, and whenever I pick up Get Ink’d book I feel like I’m catching up with friends.

Forbidden Ink is a slightly different setting than the other books, as the main character, Eryk, has been tapped to start a spin-off location for the shop, likely in LA.  This ends up working out well for playboy Eryk – because he has just discovered he has a two-year old daughter he knew nothing about, and she lives in LA with her movie-star uncle.

Milo has just lost his sister, and his best friend,  friend to cancer.  She left her toddler daughter under his care, knowing he will raise her the best way he knows how.  But on her deathbed she finally spills the name of the baby’s father, and begs Milo to find him and let him know about Sofie.  She wants her daughter to have at least one parent.

Milo follows Maya’s wishes, and tracks Eryk down, but they don’t get off to a good start.  Eryk was totally blindsided by Sofie’s existence, and even though Milo knew that fact, in his grief, he blamed Eryk for never being a dad to Sofie, even though he realizes how unfair that is. Both Eryk and Milo make an honest effort to get past their initial dislike of each other, for Sofie’s sake, and they discover the attraction between them is as strong as the dislike was at first.  But Milo is VERY deep in the closet, with no plans to ever come out.

The Get Ink’d books are always really good, and this one brought me to tears a couple of times.  The love Milo shared with his sister got under my skin in a really good way.  And I loved the dynamic between Eryk and his twin sister, Erykah.   The way Milo grapples with his decision to come out was really well done.  I can only imagine the profound sense of a weight being lifted off your shoulders after hiding a huge part of yourself for your entire life.  All in all Forbidden Ink is a fantastic addition to the series, and I look forward to more books!