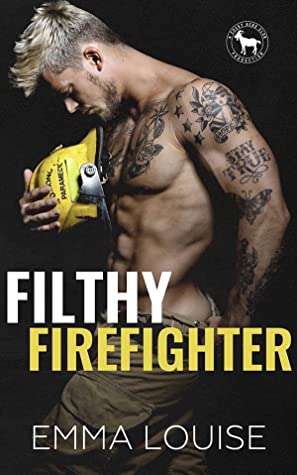 The Cocky Hero Book Club is a group of books that are inspired by Vi Keeland and Penelope Ward’s popular Cocky Hero series of standalones. Each book in the new club either uses characters from one of Vi and Penelope’s books, or is set in the same world.

Filthy Firefighter was an enjoyable read.  Adele and Hayden’s story was sweet, but I felt like I wanted to know more about them.  Adele is struggling with dark secrets from her past.  And Hayden is carrying baggage too – although it’s not as dark as Adele’s.  They first meet when Adele accidentally causes a fire in her condo, and Hayden, being a firefighter, saves her.  Then they end up becoming roommates, and the sparks fly between them.

Adele is very hesitant to reveal her secrets, but Hayden is patient and sweet, and once she does let him in, he doesn’t waver in his feelings.  It takes nearly losing Hayden for Adele to understand that no matter what poor choices she made in her past, she deserves to be happy.  And Hayden wants nothing more than to be the one who gives it to her.

I enjoyed Filthy Firefighter, but the subjects tackled in the story were pretty dark.  I feel like the book only scratched the surface, and it would have been nice to flesh out the all the characters more; even the supporting characters seemed interesting and I wanted to know more.  All in all it was an enjoyable read.