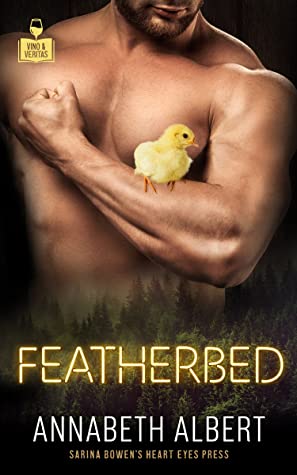 Oh my heart… this book is SO sweet.  I love Harrison and Finn to pieces.

Featherbed is the story of Harrison, the uptight, fussy lawyer from New York and Finn, the big farm boy whose family farm means more to him than anything else in the world.  Harrison’s motivation for moving to Vermont to open a book store and wine bar with his mother is a bit strange.  He’s 42, and he believes he won’t live to see his 43rd birthday because his father and grandfather died from heart problems at 42.  So he figures he may as well give his mom her dream while he has the chance.  Harrison spends so much time waiting to die, that he doesn’t really know what it’s like to LIVE.

Finn, on the other hand, tries to take each moment as it comes.  He loves the family farm, but after a bad experience with a New Yorker, he figures he’ll never find anyone who understands his commitment to the family business.  Farmer’s hours don’t mix very well with city folks.

Their attraction to each other is instant, when they bond over the mistaken delivery of a bunch of chickens to the bookstore, but neither one of them thinks they are cut out for any kind of relationship.  Harrison figures he’ll be dead before he could really be a good partner to someone, and Finn figures he’s married to the farm.

It takes time, and some nudges from both their mothers for them to realize that they’re both wrong.  Harrison especially needs to understand that sitting around waiting to die is no way to live.  Not to mention the fast that it should be up to Finn whether he wants to take that risk.

Featherbed is a GREAT kick-off to the Vino & Veritas series and I can’t wait to meet the rest of the couples who will make up this collection.  I hope we get to check in with Finn & Harrison throughout the series!