Review: Fathers Of The Bride 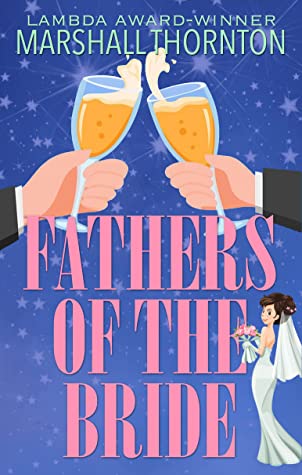 Fathers Of The Bride is, 100% one of the best books I’ve read all year.   Laugh out loud funny, heart-warming and characters that are so real I wanted an invite to the wedding!

Andy and Miles have been married for two decades, and separated for two years.  Their 24 year old daughter, Kelly, has announced she’s engaged to a man neither of them has met.  This means, of course, that they are going to have to be civil to each other after two years of communicating only through lawyers.

Kelly is a socially conscious, idealistic vegan, who for years hasn’t worn a stitch of clothing that isn’t second-hand. Her dads, on the other hand, are the stereotypical Angelenos, striving to keep their heads above water in the entertainment industry, while trying to make sure that no one ever notices they aren’t as rich as they look.

Kelly asks Miles to plan her wedding, since it’s exactly the kind of thing he loves to do.  But she doesn’t factor in her fiance’s parents.  And here’s where things get really fun.

Over-the-top doesn’t quite do justice to the Collins-Lincoln (aka Lincoln-Collins) family.  Wealthy Malibu-dwellers, complete with a “sensitivity coach”  to help them become less tone deaf to everyone in the world who isn’t rich and white.  They take over planning for the engagement party and rehearsal dinner… which goes about as well as one would expect… The engagement party at Santa Monica Pier is one of the funniest scenes ever.   No spoilers here, but suffice to say “circus” doesn’t even come close to capturing it.

Fathers of the Bride is genuinely a delightful book.  It reminded me a little bit of The Birdcage, with Nathan Lane and Robin Williams, although no one was trying to act straight.  When I picture Miles, all I can see in my head is Nathan Lane.   This book is delightfully real, while still being hysterically funny. Marshall’s writing is such a pleasure to read, and his descriptions of the funniest scenes make it easy to “see” what’s happening, making it impossible not to laugh.

I would LOVE to see more from some of the supporting cast in this hilarious story.  But whether or not there are any more books with these characters, I’ll definitely be reading more of Marshall Thornton’s work!