Review: Fakers by Lucy Lennox and May Archer 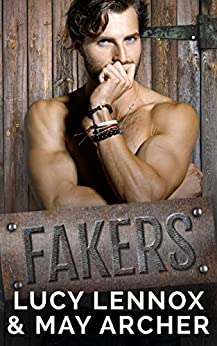 Review: Fakers by Lucy Lennox and May Archer

With a name like Licking Thicket, you KNOW it’s good! Licking Thicket, Tennessee is the setting for one of the cutest, funniest romantic comedies I’ve read.  The Thicket, as it is affectionately known, is the tiny town where Brooks Johnson grew up, and couldn’t wait to leave after high school.  He spent his entire youth trying to fit in and be the perfect guy.  And he mostly succeeded: captain of the football team, gorgeous cheerleader girlfriend, honor society…

But being a gay kid in small town Tennessee isn’t an easy road.  So, 10 years earlier, immediately after being crowned Mr. and Mrs. Licking Thicket at that year’s Great Lickin’ Festival, instead of presenting his girlfriend, Ava, with the promise ring she was expecting, he informed her he was gay, wished her the best, and promptly left for New York City.

Brooks hasn’t returned to Tennessee since that fateful night 10 years earlier.  But when his dad has a mild heart attack, he is called back to the Thicket to take his dad’s place as Grand Poobah at the annual Great Lickin’ Festival – a position known, of course, as Head Licker. Because he’s not keen on coming home after 10 years single, especially since he isn’t sure the town has forgiven him for hurting Ava,  he enlists Paul, his friend and co-worker, to pose as his boyfriend.

“This town is a parody of itself, and every single person here is in on the joke.”

After the Great Dumping Incident, Ava the cheerleader moved to LA, where she met and became best friends with a sexy, gay artist named Malachi Forrester. She knows Brooks will be coming home for the festival this year, and she is also single but doesn’t want to go home unattached. So she convinces Mal to come along with her as her boyfriend.

As one might imagine, this scenario leads to plenty of hilarious hijinks as they go through the week participating in events such as the Lickin’ Lope, which is a foot race through a forest while carrying a bucket full of milk.

Along with all the fun, there is serious chemistry between Mal and Brooks.  It leads them both to re-evaluate their lives to figure out whether they are actually where they want to be in their lives. And they both come to some profound conclusions.

“I crave being near you. I’m already missing you again and I haven’t even left.”

This was such a sweet, fun book.  Licking Thicket is a place that I doubt exists, but I wish with all my heart that it did.  A place where small town folks are accepting of people with differences, whether the difference is skin colour or sexual orientation or religion.  It doesn’t matter – as long as they love the Thicket, they’re family.   When I finished the book I was sad to leave the Thicket – and I’m SO looking forward to upcoming stories from the other characters in town.