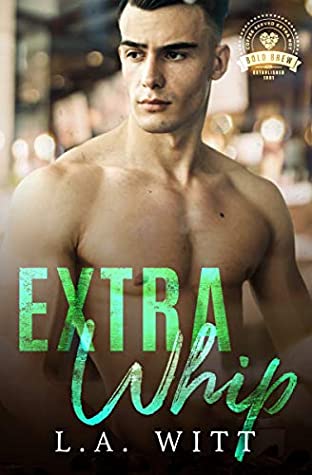 Just a word of warning before starting Extra Whip by LA Witt – make sure you’ve got a cold drink and maybe a fan nearby – because this book is seriously steamy!!

Will and Aaron are a happily married couple, together for 20 years.  They have a Dom/Sub relationship and it works well for both of them.  But in addition to being a submissive, Aaron is also a masochist.  While Will can mostly provide what he needs, they end up reaching a point where Will is just can’t hurt Aaron the way he wants and needs to be hurt. So they decide their relationship is secure enough that they should look around for a third.  Someone who isn’t another Dom, since that hadn’t worked well for them.  But finding someone who is a submissive but also a sadist will likely be challenging.

Enter Kelly – Aaron and Will call him their unicorn, because he is everything they are looking for.  In fact, he’s so perfect that they both realize they are getting too close to him, and since they had agreed they were definitely not looking for a polyamorous relationship, this becomes the problem.

I love love loved Extra Whip.  It was definitely on the kinkier side for me, I’m usually not interested in reading about causing pain.  But it’s so clear that pain is what Aaron needs and craves, and both Will and Kelly are so amazingly gentle with him afterwards that I wasn’t subconsciously worrying about Aaron’s safety.

Extra Whip is a book about expectations, and being able to let them go.   Aaron and Will never expected to fall in love with their third, but they were able to adjust their expectations and adapt.  Kelly had a father who constantly told him he didn’t live up to expectations.  And after his father died, his siblings expected him to just go along with things as they had always been.  But he learned that trying to live up to others’ expectations of you won’t ever make you happy.  And he learned to let go.  I really loved this book, it was surprising to me in so many ways!  I’ll definitely be reading more of LA Witt’s work!