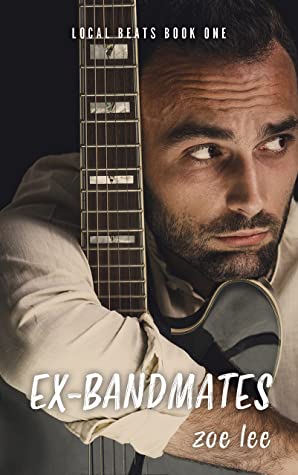 Asher is a stockbroker with a love of music, so he plays in and leads a band, Signal Fire,  part time.  When the drummer for Signal Fire gets sick, they sub in Lucas, a friend of a band member who is in Chicago for the summer on an internship.

Lucas is a musical genius, but he has a very complicated relationship with his gift. His entire life, his parents urged him to pursue music only because he could become rich and famous from it.  When he decided that wasn’t what he wanted for his life, his parents were not supportive.

The chemistry between Asher and Lucas is intense from the start, but Lucas struggles with confidence.   Asher is extremely attractive, and comes from a wonderful, supportive family, has a successful career and a band he loves to lead.  Lucas absolutely cannot believe that Asher would honestly want to be with him.  Even though they do get together, and their summer fling is one of the most intense relationships either one of them has ever had, neither one of them is in the right spot in their lives to develop a mature relationship.  The story spans nearly two years, from the time they first meet, to when they come back together as different, more mature and well-rounded men, two summers later.

Asher and Lucas are both complex characters, and watching their growth through the book is really rewarding.  At the end, when they finally get to their happily ever after, you feel like they have really, truly earned it.  They have been together and apart, and both have learned and grown.  You also realize that even though being apart was painful for both of them – there was likely no other way for them to get to their happily ever after.  Both men had to understand some things about themselves in order to be fully available to the other.   Lucas was able to grow into a person who is more at ease with his musical gift.  And their time apart makes Asher realize how much he was impacted by the demise of his first marriage, allowing him to process those feelings.

Ex Bandmates was a really great story.  It’s got enough layers to it that I’ll probably read it again.  It’s the first book in a new series, so I hope when the next books come out, we get to check in with Asher and Lucas to see how their HEA is turning out.