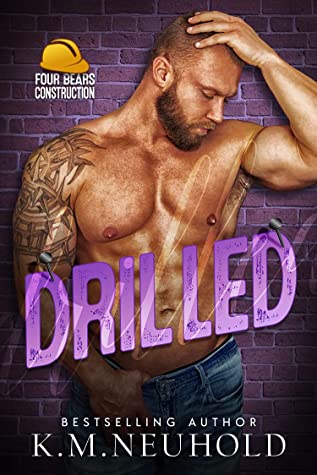 Apollo and Ridge get their happy ending in Drilled.  These two have a very long relationship – best friends their whole lives, but their relationship ended when Ridge left Apollo’s sister at the altar 15 years earlier.  Apollo never knew the reason though, because after it happened he cut Ridge out of his life completely.  Although he went about things in the wrong way, Ridge was right not to marry Anna back then, since he realized he was absolutely, 100% gay.

When Ridge gets hired at Four Bears, Apollo is determined to keep hating him, but the guys have other ideas, and send them both to fix up an isolated summer camp – just the two of them, alone together for an entire month.  Apollo is absolutely determined to NOT hear Ridge out.  He knows he could never forgive him… and even if he could forgive him, how could he tell Anna?

It doesn’t take long for the sexual tension to take hold of them both.  After Ridge is finally able to tell Apollo what happened,   they fall back into their easy friendship, with the added bonus of earth-shattering sex.  But both know that it can’t continue after their month together in the middle of nowhere is over.

These two are so completely perfect for each other, I couldn’t put their story down.  I loved the fact that Ridge knows exactly how to manage Apollo’s stubborn, grumpy, cranky nature. He understands how special it is that he’s one of the only people who can make Apollo laugh.

The guys of Four Bears Construction are the sweetest, funniest, best characters… I hate that Drilled is the last book in their series!  But Kyleen has promised us a new series, featuring a new group of big, burly, loveable teddy bears.  I can’t wait for it!