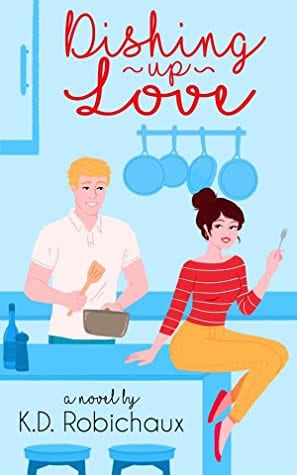 Looking for more info on Dishing Up Love and KD Robichaux? Click Here

I knew Dishing Up Love was going to be right up my alley when on page 2, main character Erin, a therapist, considers signing one of her clients up for a “fucking lobotomy” after said client asks her to analyze her dog.

Erin is a clinical psychologist in New Orleans, where she spends all her energy taking care of her clients and friends – so much so that she often forgets to take care of herself.  But then Curtis comes crashing into her life – the sexy AF reality TV chef who spots her in the grocery store while looking for the next guest on his reality show “Chef To Go”. (where he finds people grocery shopping, takes them home and cooks them a fancy meal. )  He literally falls in love at first sight.  Erin agrees to be on the show, and they end up spending the entire night together – but not in the way you might think!  A big chunk of the book details their adventures on that first night as they explore New Orleans together – from a ghost tour, to Bourbon Street to a dark, quiet little bar where Erin opens up to Curtis. While she’s certain once she shares her big secret with him, he’ll no longer be interested, but he surprises her, since what she sees as her biggest flaw, doesn’t matter at all to him.  He’s so head over heels for her that he knows without a doubt that they are meant for each other, and they will be able to get through any obstacle.

“Whatever you think is broken about yourself, I’ll spend a lifetime helping you fix, and if there are parts of you that can’t be repaired, I’d be willing to bet the jagged edges and gaps fit together with mine just right. Our jigsaw pieces could make a beautiful picture, as long as we’re together.”

I liked both characters, although I was a little disappointed that Erin used her medical condition as an excuse to feel bad about herself, especially since, as a therapist, you’d think that she’d be able to see how little sense that makes.  But she does eventually turn it around, and stops letting her fears push her down into insecurity.  Erin grew as a character, which I always like to watch.  Curtis, on the other hand, while he was definitely likeable – he seemed just a TAD too perfect for me.   He starts out as the perfect man, and he ends as the same perfect man.  He was likeable, but a little on the boring side.

Dishing Up Love is a really cute, fast read.  My favourite thing about it is that it’s set in New Orleans, and KD Robichaux does an amazing job of describing the city, almost making you feel like you’ve been there.  Pick it up if you’re looking for a fun, low-angst distraction.

ARC provided in exchange for this voluntary review.