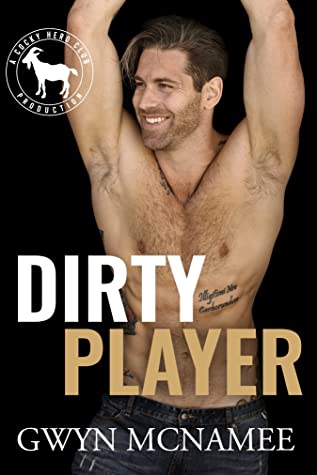 Vi Keeland and Penelope Ward are excited to bring you the Cocky Hero Club: original works from various authors inspired by Keeland and Ward’s New York Times bestselling Cocky Bastard series. All The Juicy Bits has reviewed Dirty Player by Gwyn McNamee. For teasers and links from the rest of this batch of Cocky Hero releases Click Here!!

Greer Waterson is the first woman  head coach of an NHL team.  A former Olympian for the US Women’s Hockey Team, she has fought SO hard to achieve this amazing feat.  The whole sports world is just waiting for her to fail, and she is 100% determined to prove them all wrong.

Sebastian Fury is NHL royalty.  Son of legendary player, Mike Fury, he is one of the most talented players in the league; but he is incredibly volatile.  He lands on Greer’s expansion team, the Vegas Scorpions, after his former team decides his uncontrolled temper is a liability.  And Greer’s GM picks him up, against her wishes.  She doesn’t believe her team needs the addition of a hot-head – no matter how much talent he has.

Bash’s arrogance when he first arrives in Vegas and meets Greer is unreal.  He’s that stereotypical athlete who believes he’s God’s gift to the sport, and therefore doesn’t have to pay attention to or show respect to his coaches.  It makes Bash a hard character to like at first, but as he does with Greer, he grows on you!

Their attraction is so powerful that even though Greer is fully aware of the risks she’s taking with her career, she can’t resist him.  As the first woman coach in the league, she knows she has a responsibility to both the team and to the thousands of girls who want to play hockey with the boys but need a role model.  That responsibility weighs on her heavily, and it takes Bash a long time to realize how important her career is, possibly even more important than his own.  It takes him nearly losing her, as well as some good advice from a dad he never got along with, to help him realize what he has with her.

I love books where the women have traditionally male jobs, and Gwyn McNamee does a fantastic job with Greer.  She is gutsy and tough, but she’s still feminine.  Possibly the best thing about Bash is that even though he’s an arrogant dick at first, he respects for her as both a coach and a player, and that shows through in his actions.  Dirty Player is fun, sexy and inspirational!  Definitely pick it up!