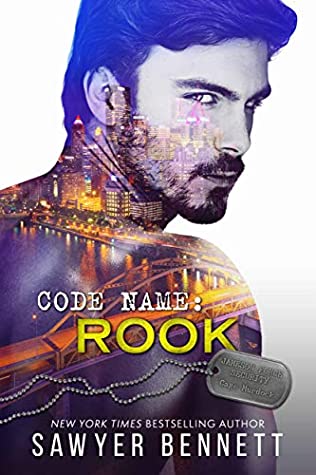 I love the crew at Jamison Security.  The way Sawyer writes feels like getting together with a group of friends you haven’t seen for a while.  I love it!

We got to meet Cage briefly during Anna and Malik’s story, Code Name Ghost;  Cage is close friends with Anna, the widow of his fallen teammate at Jamison.  Cage is a doll, but he’s a little bit goofy – it feels like he would have no trouble getting people to believe that he’s a slightly dippy used-car-salesman, even though he’s a high-powered security expert.

His usual plan of lying about his job backfires completely on him when he falls in love with Jaime.  After being recently cheated on, and with her brother hiding some kind of secret from her that’s causing her to worry he’s in trouble, the thought that Cage is lying to her doesn’t even cross her mind. So she doesn’t regret their impulsive, spur-of-the moment wedding in Vegas.  That is, until he has to leave for a mission unexpectedly, and she can’t understand why a car salesman would have to travel so much.  When her brother’s actions lead to some REALLY insane events, leading her to discover Cage’s secret in the most dramatic way imaginable, she isn’t at all sure that she will ever be able to trust him again.

Code Name: Rook is a super fun check-in with the crew at Jamison.  It was a little lighter than some of the other books in the series, which was great, especially while we are all living through major stress in our real lives!  As usual, Sawyer has given us another hit!